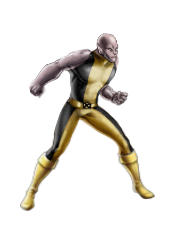 In the dark, there is none stronger than me.

Jonas Graymalkin was born in the late 18th century. At the age of sixteen, he realized he was gay. Meeting another boy in his family's barn one day, he was discovered by his father, a religious man, who believed his son to be an abomination, a spawn of the devil. Beating Jonas nearly to death, his father then sought to bury him alive in the nearby woods. This burial triggered his mutant powers, allowing him to survive some 200 years underground before being unearthed in the modern era.

Jonas rose from the remains of the Xavier's School for Gifted Youngsters following the last Brotherhood attack that destroyed the school's gardens, but also allowed Jonas to emerge from his would-be grave. Here he was greeted by Professor X. Eventually, Jonas was recruited into the New Mutants.

After performing a genetic test, Beast discovered that Graymalkin was a collateral ancestor of Professor Charles Xavier, hence how his last name is the street that the Xavier Institute was built on.

Beast analyzed the boy's powers but to his ignorance, couldn't determine what discrimination could have doomed him to being buried alive if his powers emerged while buried.

Anole comforted him stating that it wasn't his fault nor his father's because of the lack of tolerance 200 years ago, after Jonas had told him his life story.

With surprising ease, he adjusted to the 21st century well. However, he was still weary of his "identity" as a gay man to the point where he would not let any telepath read his mind for fear of how she would judge.

Despite his inexperience in battle, Graymalkin continued to work as a full member of the New Mutants. He formed a close friendship with Anole.

Graymalkin's mutant powers are related to light exposure; the darker it is, the greater his powers become, the absence of light triggering his powers. His powers strengthen with a lack of light, and he is weaker with exposure to light. Doctor McCoy stated he was unpowered in presence of light. Graymalkin has demonstrated the following powers: