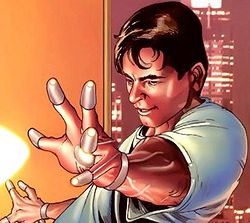 Marvel: The New 52
Base Of Operations
Grant Industries
Characteristics
Gender

Jonas was the son of Millionaire Entrepreneur Peter Grant. Jonas's Mother died when he was four after his father killed her when he lost control because of a side effect to his experiment. Jonas was told that she died in a skiing accident but he knew he killed her. When Jonas was 9 he was sent to a private school where he and his fellow peers discovered his Genius Intellect. When Jonas was 16 he began working at his fathers company Grant Industries a rival to men like Norman Osborn,Bolivar Trask and Tony Stark.

Jonas and his father took a bonding holiday so that they could mend their relationship, the plane they took was hijacked by Armed Men. Peter managed to hold them off until they killed the pilot causing the plane to descended rapidly. Peter grabbed a Parachute and gave one to his son, Peter was about to get one for himself when he was shot. Jonas tried to help is dad, when he lost his grip and fell out of the plane.

Retrieved from "https://marvelcomicsfanon.fandom.com/wiki/Jonas_Grant_(New_52)?oldid=55898"
Community content is available under CC-BY-SA unless otherwise noted.