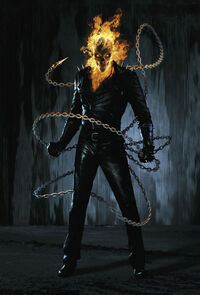 Blue, None (As Ghost Rider)
Hair

Now, Return from where you came, Demon!

-- Ghost Rider after killing Lilith and send her again to hell.

Long ago, the demon Zarathos began building a tremendous power base for himself. His penchant for human souls led him into conflicts with foes such as the Blood cult and the vile Mephisto, who saw Zarathos as a rival. Mephisto ultimately tricked and enslaved Zarathos, rendering the demon amnesiac and trapping him in various mortal forms over many years. This torture eventually dovetailed with another pastime of Mephisto's - the search for the Medallion of Power, a mystical artifact crafted by the Blood that housed the essence of the original Spirits of Vengeance. The medallion had been broken into shards and embedded into the spiritual bloodline of two families. One of these bloodlines, the Kales, attracted Mephisto's attention in the 18th century when Noble Kale's shard of the Medallion transformed him into a Spirit of Vengeance, the Ghost Rider. Mephisto failed to corrupt Noble at this time, but he kept track of the Kale clan from then on, watching as Noble manifested in the firstborn of every generation. John Blaze was born into a world of motorcycle grease and cheering crowds. The son of Barton Blaze and Naomi Kale, Johnny spent his early years in the Quentin Carnival, where his parents starred in a stunt show with Craig "Crash" Simpson. His idyllic home life ended abruptly, however, when Naomi abandoned John, taking his younger siblings - Barbara and Daniel - with her. Naomi's decision to leave had been difficult, but she felt it was necessary because of the family curse. She feared that her own firstborn would suffer in the same way that she had, so she left him behind and placed her other children in the care of a woman named Francis Ketch.

The pain of losing his mother caused John to repress many of his memories of Naomi and his siblings. When Barton died in a stunt shortly thereafter, John was adopted by Crash and Mona Simpson, who helped fabricate a past for Johnny, one that they hoped would be less painful than the truth. Believing that his real mother - "Clara Blaze" - had passed away, Johnny became an enthusiastic member of the Simpson clan, growing close to their daughter, Roxanne. The two became inseparable and, as they grew older, their love for one another moved beyond familial.

Naomi Kale returned to spy on John; while glad to see him grow into a happy young man, she still feared he might eventually succumb to the family curse. Naomi bargained with Mephisto to spare John, hoping this might end the curse. Unfortunately, Mephisto betrayed her in the final moments of her life, swearing that even though Johnny would not become the true Ghost Rider, he still could become "a" Ghost Rider.

Unaware of the mystical forces swirling around him, John followed the Simpsons into their own traveling stunt show - the Crash Simpson Stunt Cycle Extravaganza. Crash had become a true father figure to Johnny by this time, teaching him how to ride in the hopes that the younger man might eventually succeed him as the star of the show. This dream came to a fiery end when Johnny was fifteen. While practicing a dangerous stunt, Johnny was nearly killed and Mona Simpson was mortally wounded. When Mona asked John on her deathbed to quit riding, he swore to her that he would.

Over the next five years, Johnny's relationship with Crash deteriorated as John refused to take part in the show. Not understanding John's motivations, Crash grew increasingly frustrated, even accusing his adopted son of cowardice; however, John continued to practice at night, honing his skills until he surpassed his mentor. He had another secret, too: he and Roxanne had become lovers. When Crash revealed he was dying of cancer, he asked Johnny once more to take over the show, but Johnny refused despite Roxanne's disappointment. Distraught, John turned to the occult in search of answers. His studies ultimately led to a spell that supposedly could summon Satan himself. John didn't realize it, but the entity he summoned was actually the same Mephisto who had cheated Naomi Kale years before.

Mephisto then cured Crash of his cancer in return for Johnny's promise of servitude. Crash died almost immediately afterwards, however, in a failed attempt to set a world record by jumping over 22 cars. Despairing over the loss of his adopted father, Johnny attempted - and made - the jump himself, seeking to honor Crash's memory. Johnny was still at Mephisto's mercy, though, and would have lost his soul outright if not for the heroic intervention of Roxanne, who proclaimed her love for Johnny and drove the demon away with the purity of her emotion (though Mephisto would return).

Ghost Rider on his cycle Added by Deaedman Spence One night after Crash's death, Johnny found himself transformed into a skeletal being with a flaming skull. Fearing at first that this demonic form was a manifestation of his own evil side, he soon realized that he had bonded with some wholly separate entity. This merger of Johnny Blaze and a demonic force became known as the Ghost Rider, which amused Mephisto greatly. Transforming nightly into the Ghost Rider, John became involved with a local motorcycle gang, Satan's Servants. Their leader, Curly Samuels, had gained the Ghost Rider's trust, until a shocked John discovered that the soul of Crash Simpson lurked within Curly's form. Mephisto had offered Crash a new life in exchange for betraying his adopted son, and Crash had eagerly accepted. The Ghost Rider's spirit was cast into Hell, where he managed to reawaken Crash's sense of honor and love. The older man sacrificed himself to help Johnny escape, making Ghost Rider promise to protect Roxanne. John and Roxanne then journeyed into the American Southwest, where Ghost Rider battled the Satanist known as Witch Woman, Linda Littletrees. Remaining for a time near Copperhead Canyon, Ghost Rider also fought Daimon Hellstrom, the Son of Satan. This began a long period of roaming the West, as John sought to avoid Mephisto and protect Roxanne. While in San Francisco, Roxanne was tricked into renouncing her love for John, and Mephisto nearly claimed John's soul in full; however, a long-haired stranger saved the day, driving Mephisto away at the last minute. This bearded mystery man identified himself only as "a friend," and Blaze came to view him as a heavenly figure, offering hope and salvation. This stranger would appear several more times before finally being revealed as another falsehood of Mephisto.

Discouraged over the revelations about the "friend" and fearing his growing lack of control over the Ghost Rider, John left Roxanne and spent years wandering on his own. During this time, he teamed with the Black Widow, Angel, Iceman and Hercules to foil one of Pluto's evil plots, and the five heroes founded the Champions. Though billed as "super heroes for the ordinary man," the Champions were beset by internal tensions and never truly gelled as a team. After a few months, Ghost Rider realized that he was too much of a loner to remain with the group and he bid them farewell when the Champions disbanded.

By this time, the demonic half of the Ghost Rider was exerting more and more control over his actions and personality. John found it increasingly difficult to continue his stunt rider career, surrendering the title of World Champion Stunt Rider after losing a series of grueling challenges to Flagg Fargo. A demoralized John found a sense of peace by joining the Quentin Carnival, a place he did not remember from his childhood, but which nevertheless felt like home. Blaze forged a friendly rivalry with fellow rider Red Fowler and engaged in harmless flirtation with Cynthia Randolph, a journalist for Woman magazine assigned to follow the Carnival. While traveling with the Carnival, John also ran afoul of the mad Centurious, who fed off imprisoned souls using an ancient artifact called the Crystal of Souls; this encounter stirred dark memories in the Ghost Rider. Shortly thereafter, the demonic Nightmare captured John and revealed the name of the demon within Blaze: Zarathos.

Blaze and Zarathos continued to struggle with each other for dominance until Roxanne Simpson returned, seeking aid for a town overrun by Centurious and his agent, the Sin-Eater (Ethan Domblue). Ghost Rider clashed once more with Centurious, learning that he and Zarathos had a feud going back centuries. In the end, Zarathos and Centurious were bound within the Crystal of Souls and John Blaze was free at last. With a gracious donation from his old friend the Angel, John was able to purchase the Carnival and marry Roxanne, with whom he had two children, Craig and Emma.

He was Later recruited by Michael Morbius to stop Lilith and Dracula, and became a member of The Midnight Sons.

Retrieved from "https://marvelcomicsfanon.fandom.com/wiki/Johnny_Blaze_(Earth_-_23681)?oldid=67307"
Community content is available under CC-BY-SA unless otherwise noted.