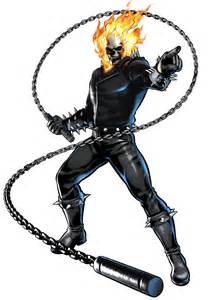 Blue, None (As Ghost Rider)
Hair

Strawberry Blond, None (As Ghost Rider)
Unusual Features
As Ghost Rider, Johnny has the appearance of a flaming skeleton.
Status
Citizenship

Little is known about Johnny's life before being held captive by Mephisto. It can be assumed to be similar to his mainstream counterpart.

Ghost Rider was freed from Mephisto's grasp by the temporary sacrifice of one of the Ultimate Alliance. After defeating Mephisto, John officially joined the Alliance.

Blaze is an expert stunt rider. Although he's had no proper training, he is also a formidable hand to hand combatant and has become quite adept at using his powers in combat situations.

Retrieved from "https://marvelcomicsfanon.fandom.com/wiki/Johnathon_Blaze_(Earth-6109.2)?oldid=122059"
Community content is available under CC-BY-SA unless otherwise noted.