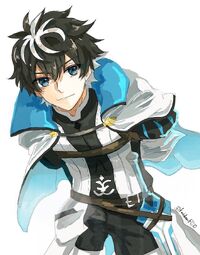 "Hello there Truth, I heard you have a gift, the power to sense a lie and reveal the truth from people, but at the same time, you can't properly control it. Please, allow me to help you in that regard."

When Xavier found Truth, he was a young man with black and white hair and blue eyes. His attire consists mainly of a black and white tunic with blue accents, black pants, thigh-high armored boots, and a short white cape with a black edge. Aside from his boots, his left arm had a gauntlet, and he worn a set of faulds at his waist. A sword scabbard hangs at his left side, and red marks coat his right gloved arm. When he's out of uniform, Arthur would be dressed in normal attire consisting of a simple black shirt with a white jacket, and long worn out jeans. He'd be wearing black jogging shoes with white socks.

Mutant Physiology: Truth was born as an mutant, a human with a mutation caused by the X-Gene created by the Celestials. Truth is born with various degrees of abilities, with his primary revolving mental manipulation of forcing people to reveal secrets, facts and truths, which is why he's commonly called, Truth.

Gifted Intellect: Truth is a rather intellectual gifted human being. According to Xavier, Truth has a bright future a head of him due to his intelligence.

Retrieved from "https://marvelcomicsfanon.fandom.com/wiki/John_Truth_(Earth-888)?oldid=224969"
Community content is available under CC-BY-SA unless otherwise noted.