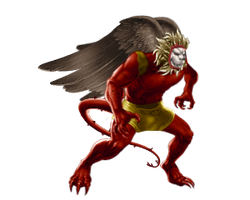 Earth-1010
Base Of Operations
Mobile; Formerly the Fridge
Characteristics
Gender

Yellow
Unusual Features
Horton's transformation has caused him to take on the appearance of the mythological Griffin. He has large, eagle-like wings, feline facial features, a spiked tail, fangs, scales, and claws.
Status
Citizenship

Single
Occupation
Criminal
Origin
Origin
Against his will, Johnny Horton was transformed by a scientist using mutagenic techniques and surgical procedures at the orders of the Secret Empire.
Place of Birth
Tacoma, Washington
Creators

Lady, the only good super-hero is a dead one!

Johnny Horton was a small-time criminal who was captured by agents of the second subversive organization to be known as the Secret Empire. The Secret Empire assigned a surgeon in its employ to transform Horton into a superhuman being by using various techniques, including grafting wings and claws onto Horton's body permanently and administering an experimental mutagenic serum into him. Horton was named the Griffin after his new appearance, which vaguely resembled the mythological griffin, a creature that was half lion and half eagle.

At first, Horton retained his normal intelligence and sanity in his new form. He loathed his new appearance, believing he was now a freak, but nevertheless obeyed the Secret Empire's orders to attack the mutant known as the Beast. The Beast and his colleague, the Angel, defeated the Griffin, who was sent to prison. While in prison, the mutagenic serum the Griffin had taken caused him to go insane and further transformed his body, giving him a spiked tail and vastly increasing his strength. The Griffin broke free of prison and hunted down the surgeon who had transformed him. When the surgeon was unable to tell him the location of his former masters in the Secret Empire (which had by this time been defeated), the Griffin hurled the surgeon from a great height in rage. The costumed crimefighter, Spider-Man, caught the falling surgeon, but the two men struck a water tanker when Spider-Man's webbing broke and they both plunged into the water. The Beast, who had learned of the Griffin's escape, helped Spider-Man and the surgeon to safety. Although Spider-Man took the brunt of the impact against the tanker, the surgeon died. Together, Spider-Man and the Beast defeated the Griffin, who was taken into police custody.

Griffin is arrested and transferred to the Fridge by S.H.I.E.L.D. Agent John Garrett, who was secretly a HYDRA member. During the HYDRA Uprising, Horton was freed by Garrett himself.

The Griffin possesses superhuman strength, enabling him to lift around 90 tons.

Retrieved from "https://marvelcomicsfanon.fandom.com/wiki/John_Horton_(Earth-1010)?oldid=255309"
Community content is available under CC-BY-SA unless otherwise noted.