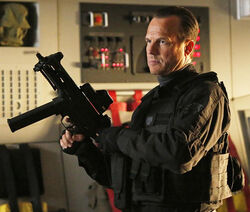 Sometime ago, agent John Garrett of S.H.I.E.L.D. joined the Hydra cell embedded within S.H.I.E.L.D. In 1990, he stepped on an IED in Sarajevo. The blast left him critically wounded, but Garrett survived these wounds when he became the first test subject in Project: Deathlok, a project carried out by Hydra and their allies at Cybertek Corporation to build a super soldier via cybernetic prosthesis. Decades later, Garrett's organs began to fail, leaving his biomechanical parts as the only things keeping him alive.

Fifteen years ago, Garrett recruited a young Grant Ward out of a juvenile detention facility in Massachusetts to join Hydra. Garrett trained Ward by leaving him to fend for himself in the Wyoming wilderness. For five years, Garrett taught Ward how to survive at all costs and trust in nobody. At the end of his training, Garrett ordered Ward to kill his dog Buddy.

Under unknown circumstances, Garret entered an operation to create super soldiers known as Project Centipede. He controlled the organization from behind the scenes, using the identity of "the Clairvoyant" to contact project member Edison Po on rare occasions. If anyone tried uncovering the Clairvoyant's identity, Garrett would rely on proxies to kill them, as he did with an associate of Po as well as three members of his S.H.I.E.L.D. team.

Garret had S.H.I.E.L.D. agent Phil Coulson captured to gain information on how he came back to life so that Project Centipede could make their super soldiers invincible. He contacted Raina for the first time, disposing of Po as his interrogation methods were bearing no fruit. He provided Raina with information regarding Coulson's former love interest, Audrey Nathan, to coax him into willingly submitting to the mind probe machine. However, Coulson's team managed to rescue him before he could get anything useful and S.H.I.E.L.D. had simultaneously taken down Centipede operations worldwide.

Later learning that Coulson's team was chasing Ian Quinn, Garrett ordered him to shoot Skye, so that he could follow Coulson's team to the place where Coulson had been ressurrected, as the team would want to use it to save Skye's life.

Because of this, he was one of two agents S.H.I.E.L.D. sent to board the plane of the insubordinate Phil Coulson to retrieve Ian Quinn and bring him to the Fridge. After clashing with Coulson, Garrett received permission from his superiors to interrogate Quinn on the plane without first bringing him to the Fridge so Coulson could continue on his mission to heal Skye.

After the interrogation, Garrett accompanied Coulson, Ward, and Fitz to the Guest House, a hidden S.H.I.E.L.D. facility thought to house a drug that could bring Skye back from the brink of death. After killing the two guards posted in the facility, Coulson's team activated a self-destruct sequence, and Garrett stayed behind to disengage it. He was unable to stop the procedure, and had the team evacuate in a hurry to escape the destruction, while he secretly grabbed as many vials labeled "GH" as he could carry. However, Coulson lagged behind after finding a door labeled "T.A.H.I.T.I." in the facility, and Garrett stayed behind to get him. The two escaped the facility as it exploded. His mission complete, Agent Garrett left with Quinn for the Fridge.

Garrett and Triplett were then ordered to track down the Clairvoyant, the mysterious leader of Project Centipede, and his bodyguard Mike Peterson. Soon after arriving at a safehouse in Sydney, Peterson attacked the two agents, leading them to believe they were closing in on the Clairvoyant's location. Garrett and Triplett then regrouped with agents Victoria Hand, Felix Blake, Jasper Sitwell, and Coulson and his team to bring them up to speed on their search. Garrett believed the Clairvoyant might be one of the thirteen individuals S.H.I.E.L.D. once suspected of having psychic abilities but were ultimately rejected from the gifted individuals index.

Skye, fully recovered since the last time Garrett saw her, divided the agents up into three teams of two to investigate individuals suspected of being the Clairvoyant. Garrett was paired up with Coulson, and were sent to Muncie, Indiana to investigate Noriko Sato. However, after Peterson attacked agents Blake and May in Macon, the S.H.I.E.L.D. search narrowed in on Thomas Nash. S.H.I.E.L.D. was able to track Peterson to a location in Pensacola, Florida, where he led Garrett and Coulson on a chase leading them to Nash's location. Nash confessed to being the Clairvoyant, but Ward killed him in cold blood before he could be taken into custody. Garrett and Triplett then parted ways with Coulson and his team to continue their search for Peterson.

When Hydra activated its agents within S.H.I.E.L.D, Agent Garrett came under fire from S.H.I.E.L.D. drones. He was saved by Coulson and his team, who brought Garrett on board with them to take on whatever they faced at the Hub. Garrett - secretly a Hydra agent himself - pushed Coulson into taking the fight to Agent Hand herself, who Coulson believed was the true identity of the Clairvoyant. However, while they attempted to rescue Simmons and Triplett from Hydra agents at the Hub, Garrett let slip a piece of information Coulson had never told anyone. As the two old comrades were arguing with each other, a team of S.H.I.E.L.D. agents cornered them. Garrett gave an order to the Hydra agents among the team, who proceeded to execute the other agents still loyal to S.H.I.E.L.D. Garrett took command of the team, revealing himself to Coulson as a Hydra agent and the true Clairvoyant. Before he could kill them, an explosion from a bomb Skye and Ward planted elsewhere in the Hub provided a distraction for Coulson and May to attack. Garrett fought Coulson as May incapacitated his Hydra agents. Just as Garrett had Coulson pinned down, a grenade from Fitz knocked him out, allowing Coulson to take him into custody.

Agent Hand later oversaw Garrett's transport to the Fridge, and took Ward along so he could personally lock Garrett in his prison cell. While on the plane, Hand suggested to Ward that he kill Garrett as he killed Nash when he believed he was the Clairvoyant. Ward seemingly agreed, but turned his gun on Hand and the agents guarding Garrett. Ward signed to his former S.O. that he was with him now.

Some time later, Ward broke Raina out of prison, and took her to meet Garrett in person. Although she was at first shocked to learn that Garrett was not a true clairvoyant, he won back her trust by formally inducting her into Hydra. In his secret base, Garrett brought Ward and Raina up to speed on his failed experiments with the serum he recovered from the Guest House, and informed them that Hydra would soon be taking the Fridge.

Garrett, Ward, and a team of Hydra agents stormed the Fridge, and broke into the room holding all of the items supposedly destroyed as part of Project Slingshot. Garrett recovered the Hydra weapon Coulson and his team had recovered in Peru, and used it to break out a number of prisoners kept at the Fridge, including Ian Quinn and Marcus Daniels. Ward then used the device to dig into a secret room hidden under the Fridge. With their mission complete, Garrett sent Ward to regroup with Coulson's team, and beat him up to make it look like he had to fight to make it out of the Fridge alive. Soon after, Ian Quinn confronted Garrett on ruining his life, but Garrett calmed him down once he showed Quinn what he and Ward recovered from the room under the Fridge - his gravitonium.

Soon after, Ward hijacked the Bus from Coulson, and made it his mobile command center. Aboard the plane, Garrett revealed to Ward that his organs were failing, and that Cybertek had only given him a month or two more to live. Once the Bus arrived in Cuba, Fitz and Simmons were caught spying on the plane. Ward took them aboard for Garrett to deal with, but Fitz triggered an EMP device disguised as a toy buzzer. The EMP overloaded Garrett's electronics, rapidly worsening his condition. Near death, Garrett ordered Ward to kill Fitz and Simmons, and Raina to inject the recreated GH.325 drug into the Centipede serum that had been keeping him alive. Raina complied, sending Garrett into violent convulsions. When the seizure stopped, Garrett claimed to experience "the universe."

Suddenly driven into a manic state from the drug, Garrett started writing down some alien formula and later claimed to have been granted true clairvoyance as he answers a question Raina had for him. However, Garrett interrupted Quinn's sales pitch to high-ranking U.S. military officials to sell Centipede soldiers, leading him to killing one general with his own rib, forcing Ward to lock up the other officials.

Upon learning of Coulson's team assaulting Cybertek, he ordered Ward to bring Skye to him, having learned from Raina how "special" she is. He is soon confronted by Coulson and Nick Fury. The two ex-S.H.I.E.L.D. agents trash talk him, belittling his selfish nature and mocking his apparent misinterpretation of Fury's words (Garrett claiming that he had become something bigger whereas Fury believed that men could accomplish anything as part of something bigger), right before Peterson, whose son had been rescued by Skye, turns on Garrett and seemingly killed him. Though Garrett's body was stuffed into a metal coffin by a hazmat team, he later revives and straps himself into a machine that strapped on a cybernetic armor. He had only a moment to enjoy it before being unceremoniously vaporized by Coulson using the Hydra energy weapon.

Thanks to the recreated GH.325 serum, Garrett's body has access to the full capabilities of the Centipede serum, granting him super strength and an unclear power consisting of super-intelligence and/or precognition.

Retrieved from "https://marvelcomicsfanon.fandom.com/wiki/John_Garrett_(Earth-1010)?oldid=129802"
Community content is available under CC-BY-SA unless otherwise noted.