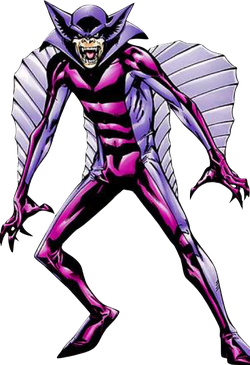 You ally yourself with amateurs you Yankee fool!

Lord John Falsworth was the youngest of two sons of Lord William Falsworth, one of the wealthiest members of the British aristocracy in late Victorian and Edwardian times. John left, embittered, when his older brother Montgomery inherited the title and the bulk of his estate upon William's death, shortly before World War I.

Eventually, Falsworth sought the castle Dracula in Romania in order to find and control the Dracula as a means for achieving immense wealth and power. However, Falsworth fell victim to Dracula's hypnotic powers and was turned into a vampire himself. Dracula bid Falsworth to return to England to wreak havoc upon the country that had repulsed him earlier while Dracula himself fought Abraham van Helsing and other enemies.

Once World War I broke out, Falsworth, still intent on destroying England, offered his services to the German intelligence, who gave him the code-name Baron Blood. Falsworth adopted his costume to better instill terror in his victims. Falsworth became the German's greatest secret weapon in the final months of the war. He battled Freedom's Five, a group of costumed agents from Great Britain and her allies, but, although Blood was always defeated, he also managed to escape. He was finally found and fought by the costumed hero, the original Union Jack (and secretly Falsworth's elder brother Montgomery). Union Jack injured Falsworth with a silver weapon, causing him to flee England.

After World War I, Falsworth began studying occult arts and followed Adolf Hitler's rise to power. He understood Hitler and his Nazi party were similar to him.

Although Falsworth's activities remain largely unrevealed during this time, at some point he again offered his services to the emerging Nazi regime in Germany. German scientists performed painful experiments which enabled him to avoid his vulnerability to direct sunlight. During World War II, German intelligence once again sent Falsworth to England to continue a new reign of terror.

His brother, aided by the Allied heroes collectively known as the Invaders, discovered Blood's secret identity. In the ensuing battle, Falsworth was impaled when he fell on stalagmite that had traces of silver in it.

However, Falsworth was resurrected by superhuman Axis agents, and he joined their team, the Super-Axis, who soon were defeated by the Invaders. The complete history of Falsworth's activities at this time are unknown.

In recent years, Falsworth was resurrected by a mortal agent of Dracula known as Dr. Charles Cromwell. Cromwell fell under Falsworth's influence, who learned all he could of medical practice from Cromwell. Continued vampiric activity raised the nearby villager's suspicions, but were tricked by Falsworth into destroying Cromwell and his daughter as the vampires.

Baron Blood possessed the typical powers associated with vampires, although to a greater degree than most:

Baron Blood was a good hand to hand combatant and was a highly skilled espionage agent during World War II.

Baron Blood possessed most of the same special vulnerabilities common to vampires:

Retrieved from "https://marvelcomicsfanon.fandom.com/wiki/John_Falsworth_(Earth-1010)?oldid=145670"
Community content is available under CC-BY-SA unless otherwise noted.