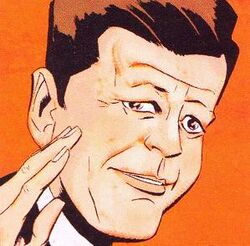 John Fitzgerald Kennedy was an American politician who served as the 35th President of the United States from January 1961 until his assassination in November 1963. The Cuban Missile Crisis, The Bay of Pigs Invasion, the Nuclear Test Ban Treaty, the establishment of the Peace Corps, developments in the Space Race, the building of the Berlin Wall, the Civil Rights Movement, the "New Frontier" domestic program, abolishment of the federal death penalty in the District of Columbia, and increased U.S. involvement in the Vietnam War all took place during his presidency.

Kennedy's time in office is also marked by high tensions with communist states, Cuba in particular. An attempt in April, 1961 at the Bay of Pigs to overthrow the country's dictator, Fidel Castro, was thwarted by armed forces within three days. His administration subsequently rejected plans by the Joint Chiefs of Staff to orchestrate false-flag attacks on American soil in order to gain public approval for a war against Cuba. In October 1962, it was discovered Soviet ballistic missiles had been deployed in Cuba; the resulting period of unease, often termed the Cuban Missile Crisis, is seen by many historians as the closest the human race has ever come to nuclear war.

There has been speculation that his assassin, Lee Harvey Oswald, had not intended to kill him, and that the bullet he fired was controlled by Magneto to hit him fatally. Magneto claimed he was trying to stop the bullet, revealing Kennedy had been a mutant.

Retrieved from "https://marvelcomicsfanon.fandom.com/wiki/John_F._Kennedy_(Earth-1010)?oldid=193290"
Community content is available under CC-BY-SA unless otherwise noted.