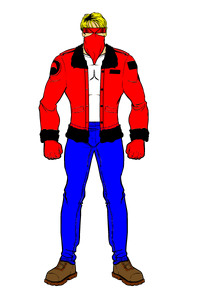 Blonde
Unusual Features
After an accident he lost both of his eyes.
Status
Citizenship

John Adams was a young boy from the troublesome neighborhood of Manhattan, the Hell's Kitchen. He grew up listening stories about Daredevil, Spider-Man, Cloak and Dagger and wanted to be like them, a superhero, savior of the Hell's Kitchen. He started his heroic acts fighting the bullies from his school, but always ended hurt and helpless. One day, when the bullies where hitting him, a man appeared and saved him from the bullies just to tell him his parents were dead, John, that didn't believe him ran to hi house were he saw another man, a man in a white suit and a pink mask that told him that his parents were bad people that deserved their fate and gave him a red rose.

From that day on, John, started following that man in all his business, starting, without knowledge of it, a criminal career with the Kingpin. When he turned 16, the Kingpin, started to give him missions were killing someone was required and some smuggling tasks, in that moment he realized he was working for the organized crime in New York and decided to left this life behind. In order to do that he had to kill one more person, just one more and he could be a normal man forever. He sent a letter to the New York Police Department telling where the Kingpin and his men were going that night and a list of some crimes committed by them. On that night he waited outside of the bar where the police captain will found the Kingpin and arrest him. When he saw the police car he prepared his gun and waited for the policemen to enter the bar, but only the captain entered and the other policeman standing in front of the door couldn't let him pass. He went to the door and killed the policeman stabbing a knife on his chest, later he entered to the bar shouting and shooting trying to kill somebody, but his bullets only hit one man, the captain of the police. He was condemned to pass two years in a reformatory.

After those two years he was free, Kingpin couldn't trust a boy who has been in 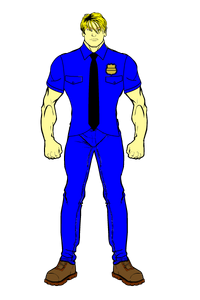 jail two years after shooting everyone at the bar he possessed, what he didn't suspect was that Kingpin wanted him dead for trying to kill him. When he first stepped the street two Kingpin men were waiting for him, and made him go to an alley to fight him. He tried to fight back but they were two against him and they would have killed him if the police captain hadn't appeared to save him and make him his apprentice and later a police assistant.

While on a mission with the im to disband the Kingpin family he took a bullet that was shot to kill the captain. That bullet hit him between the eyes injuring him badly and making him to go to an hospital. After hours on the operation room, the surgeon could save his life but not his eyes and this way he stayed blind forever, but with a strange radar sense that helped him to see figures and forms, that was enough.

Retrieved from "https://marvelcomicsfanon.fandom.com/wiki/John_Adams_(Earth-636)?oldid=206888"
Community content is available under CC-BY-SA unless otherwise noted.