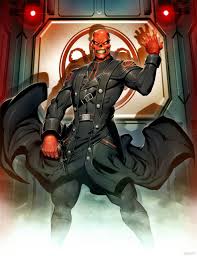 Originally a professor at one of the universities in Berlin, Johann Schmidt became an Officer of the Schutzstaffel with the rank of Obergruppenführer. He was closely affiliated with Heinrich Himmler and Adolf Hitler. Schmidt and Hitler shared a passion for Norse mythology according to Abraham Erskine, a German scientist who had defected to the United States. Hitler had subsequently located Erskine and sent Schmidt to force him to finish an experimental physiology-enhancing serum, only for Schmidt to take the serum and inject it into himself. The unfinished serum increased Schmidt's physical & mental abilities, however it also caused a combustion reaction that horribly scarred his face, disfiguring its appearance to that of a hideous red skull.

Retrieved from "https://marvelcomicsfanon.fandom.com/wiki/Johann_Schmidt_(Earth-6160)?oldid=226705"
Community content is available under CC-BY-SA unless otherwise noted.