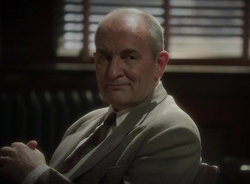 Dr. Johann Fennhoff was a psychologist who, in the first half of the 20th century, developed and mastered a method of psychological manipulation that granted Fennhoff total control over his patients by forcing them to relive happy or desirable memories. In 1943, during World War II, he applied his hypnotic methods to assist in the amputation of a wounded private's legs. In 1944, he was present at the battle of Finow, Germany, where an American general released Midnight Oil with the intention of reducing the Russian troops' need for sleep. Instead, the chemical instilled violent insanity in the soldiers, and while Fennhoff had access to a gas mask and managed to survive, his brother was killed.

That year, Fennhoff was forcibly recruited into the secretive Russian spy organization Leviathan. He remained in Leviathan's service after the war and began planning to obtain revenge on Howard Stark, the creator of Midnight Oil. In 1946, the Howling Commandos and Agents Peggy Carter and Jack Thompson of the Strategic Scientific Reserve, while investigating the theft of dangerous weapons from Stark, found him posing as a prisoner named Dr. Ivchenko at one of Leviathan's bases in Belarus. Believing they were rescuing him, they took him back to the United States.

Fennhoff was taken to the SSR's offices in New York City, where Agent Carter and Chief Roger Dooley questioned him on what he knew of Leviathan. While he was in Chief Dooley's office, he secretly communicated orders to kill Agent Carter to Dottie Underwood, one of Leviathan's female assassins. Although he tried to manipulate Chief Dooley into giving him the location of Stark's stolen technology, they were interrupted by another SSR agent, Daniel Sousa, with incriminating information against Agent Carter. Instead, Dr. Fennhoff manipulated Agent Yauch into giving him the information he wanted, and then had the agent walk out into a busy street where he was struck and killed by a passing truck.

After the SSR arrested Agent Carter, Dr. Fennhoff communicated new orders to Dottie regarding an attack on the SSR's office. However, Peggy and Edwin Jarvis noticed the doctor's strange activity and warned the SSR about the impending attack. Although they were skeptical of Carter's warning, Chief Dooley sent a team of agents across the street to investigate while he personally kept his eye on the psychologist. However, Fennhoff took advantage of the situation and hypnotized Chief Dooley into isolating Carter and Jarvis and allowing him inside the SSR's lab, where he had access to Stark's recovered technology. He took special interest in the Midnight Oil and in a prototype of a heated combat vest designed for winter warfare. After having Chief Dooley strap himself into the vest, Fennhoff walked out of the SSR's office with the Midnight Oil in hand. The vest's power source was faulty and volatile, but its circuitry ran throughout the vest, making it impossible to remove from the chief's body without it exploding. Chief Dooley would eventually sacrifice himself to save his agents after making Carter promise to bring "Dr. Ivchenko" to justice. Meanwhile, the psychologist had Dottie release the Midnight Oil inside a movie theater, releasing a gas that caused the audience to brutally kill each other.

Dr. Fennhoff and Dottie attempted to make their escape back to Russia. Moments before they could secure a plane, Dr. Fennhoff heard over the radio that Howard Stark and the SSR would give a press conference where they would announce all charges against Stark had been dropped. Recognizing the opportunity this afforded them, Dr. Fennhoff and Dottie went back to New York. However, they recognized this was a trap set by the SSR, so they set up a diversion involving a sniper rifle set to automatically fire. The SSR fell for the diversion, and Dr. Fennhoff and Dottie grabbed Howard Stark in the confusion. They took him to one of his nearby hangars, where Dr. Fennhoff revealed his motive behind all of this to Howard Stark before taking him under his control. Dr. Fennhoff convinced Howard that he was in the Arctic and had found the signal from Captain America's plane. Stark took off in one of his planes towards what he thought was Captain America's signal, but was really flying a plane filled with canisters of Midnight Oil towards Times Square, which was crowded for the VE Day celebration. Dr. Fennhoff kept in contact with Howard Stark through the radio in the hangar's control room, but was interrupted when Peggy Carter barged in with a shotgun and him and Dottie at gunpoint. Dr. Fennhoff managed to get away from her when Dottie attacked her. During his escape, he knocked down Agent Thompson. Agent Sousa was not far behind him, and Dr. Fennhoff attempted to hypnotize him into killing Agent Thompson. Agent Sousa, however, was prepared for this, and wore ear plugs to prevent him from hearing Dr. Fennhoff's words. Sousa knocked out Dr. Fennhoff, and he was taken into SSR custody.

Dr. Fennhoff was placed in a high-security facility with a mechanism around his head to prevent him from speaking. His cellmate, the Hydra scientist Arnim Zola believed the two of them would do great things together. Although the extent and nature of Dr. Fennhoff's subsequent involvement with Hydra is unknown, Hydra employed a brainwashing technique known as the "Faustus method" to control individuals into the 21st century.

Hypnotism: Dr. Fennhoff is able to put people into a hypnotic trance through which they become pliable to his suggestions. Outwardly the victims seem normal, although they are compelled to answer all of his questions truthfully, and can be compelled to follow his directives, even to the point where they will kill themselves if so directed. The extent of his control is limited by the willpower of the victim, but his talent is such that even strong-willed individuals have had little resistance to falling under his sway.

Psychology: Dr. Fennhoff is able to deduce many things about people just by holding a conversation with them. His deductive talent extends to observing individual's personal surroundings to glean information and help uncover their secrets.

Spy: Dr. Fennhoff is well versed in skills relating to transmitting information discretely. His skills include a fluent knowledge of Morse code, which he can communicate with clearly by way of subtle hand gestures.

Retrieved from "https://marvelcomicsfanon.fandom.com/wiki/Johann_Fennhoff_(Earth-1010)?oldid=97490"
Community content is available under CC-BY-SA unless otherwise noted.