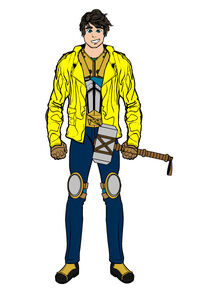 You're right, my life has never been harder, specifically since my brother died. At the hands of a giant robot. And now that I have this literal gift from the gods. I am going to make damn sure no one else's 'Charlies' die today. Now yield, beardo.

Ten years ago a rusted Destroyer, about on the brink of falling apart, touched down on Newark. During this, he, his sister, and his five year old brother, Charlie, were at the doctor's office. The Destroyer marched on and with its command in mind destroyed several buildings with its fiery laser. Somehow Joe and his mother remained untouched but his brother however fell victim to the laser. For the next six years of his life, Joe grew up despising aliens of any kind. The Inhuman and X-Gene had long been dormant, but the so-called Gods were still out there.

One day in August, the 16 year old Joe woke up to the call of his best friend. "Dude, you there?" KC asked. "Ugggghhh," Joe grumbled. "what is it?" "The Hammer," KC responded. "What Hammer?" Joe asked groggily. "Thor's Hammer," KC responds, rubbing his forehead. "Meowmeow? Well... where is it?" Joe asks. "It's here in the underpass. Fell right smack dab in the middle of the half pipe." KC explained. KC Johnson was Joe's childhood best friend who recently moved to Harlem but at this time is visiting his grandparents in Newark. "You have to try and lift it." KC insisted. "Why?" Joe asked. "Because no one else has tried yet…" KC lies, as he is watching a drunken white man try and lift it with a carjack. "Why haven't you tried?" Joe bounces the question back at him. "A brother gets enough of a bad rep imagine one with a hammer and the power of lightning? BOOM! Instant public enemy number one. Besides I say that hammer has a thing for white dudes…" he jokes "Fine, I'll be there in ten…" he says. Joe got out of bed and put on a green long sleeve shirt and blue sweat pants. As he ran down the stairs he had nothing but revenge on Asgard on his mind. "Hey ugly, where you going so fast?" asked Danielle. "Hey Dani, someplace muy importante." responded Joe. "Like a date with that Quinn chick?" Dani asks. "Something else importante." Joe jokes, they share a laugh. "Keep it up with the Spanish, Mom'll like it…" She chuckled. "Yeah yeah…" Joe said as he walked out the door.

"What about him is the real deal?"

"That guy is !$&@#% Thor man. You can go get your ass electrocuted I'm out." Says White Ski Mask Guy. "?&%$#! C'mon big deal let's dance." He says. BZZZZZZZZ the hammer buzzes as lightning comes frying the navy ski mask guy. "Okay I see how it is." He says as he pulls out a knife. He start running towards Thor but he just knocks the knife outta his hand with the hammer than does an uppercuts with his hammer. His ski mask flies off revealing a white man with slick back hair and a scraggly mustache. He starts to back up against a wall. "Hey man how much you want huh? Uh, 10%? 25%? 50%? Come on, just work with me, I can work with giving you 75%!" He begins to sob, "Just please don't kill me." "Oh I won't have to, I'm just gonna knock you out for a while…" Joe walks over to the teller who's shaking in fear. She hands him the pile of money she was going to give the robbers. "Take it…" she whispers "I can't, but I'll take a Benjamin for good measure. And in exchange I have a 5 solid gold Asgardian tokens so see what you can do with that." He says as he lifts off the ground dropping the tokens in his wake, as he gets home Sarah and Dani are standing there in his room. "You have some explaining to do…" His mother says… "A lot," he responds.

Fighting skills on par with Eric who learned hand to hand combat from his time with Thor, Hercules, and Captain America (Steve Rogers).

Equipment: None known.
Transportation: Teleportation (via the Bifrost)
Weapons: Mjolnir

[[Category:Earth-11213]]
Retrieved from "https://marvelcomicsfanon.fandom.com/wiki/Joe_LaMont_(Earth-11213)?oldid=257590"
Community content is available under CC-BY-SA unless otherwise noted.