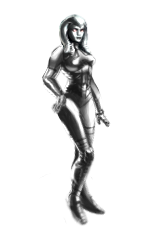 The robot named Jocasta was built by the robot Ultron in order that he might have a mate. Using the Wasp's brain patterns, he gave her a personality and assigned her the mission of keeping Mockingbird captured in a Wakanda lab.

Being a "non-living" construct, she requires no food, water, or oxygen to survive and thus is also immune to poisons and diseases and can easily survive in the vacuum of space and underwater.

Retrieved from "https://marvelcomicsfanon.fandom.com/wiki/Jocasta_(Earth-1010)?oldid=148711"
Community content is available under CC-BY-SA unless otherwise noted.