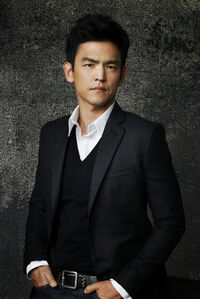 James, better known as Jimmy, Woo is an agent for the organization S.H.I.E.L.D. he is the son of Chinese immigrants. He started out as an FBI agent, but was brought into SHIELD's fold after proving himself a capable agent in that sphere. His father was a former soldier, alongside his brother, in the Chinese army who during his service crossed paths with The Ten Rings. There he had a glimpse of the man he believed to be the legendary and mythic underworld figure known as The Mandarin. (Though he was actually the father of the current Mandarin) During the ensuing battle with The Ten Rings, Jimmy's father was killed, but his uncle managed to make it out. Fearing that The Mandarin would come after him, Jimmy's uncle uprooted he and her mother and went to America with them.

For years after joining SHIELD he hunted The Mandarin, whose existence was questioned, to avenge his father. Most often believed to be nothing more than a "boogeyman" in spite of Woo's persistence. He is taken off that case on the official level after the incident where a man named Aldrich Killian used the legend of The Mandarin to his advantage as a part of his bid to take control over the supply and demand of the war on terror but was foiled by Tony Stark. That didn't stop Woo from keeping an eye out for him on an unofficial level, and trying to find leads where he could.

During the events of Iron Man: Hands of the Demon Stark Industries is taken over by Hammer Industries. Though SHIELD is suspicious, they have nothing to hold them on, and are forced to allow it to proceed. During this time however, Tony Stark's best friend Col. James Rhodes goes AWOL on quest to take down Hammer Industries and their ally The Ten Rings. Outsiders not knowing of this connection, SHIELD is pressured by Hammer Industries into helping in hunting him down. Fury knew that Rhodes believed that the "true Mandarin" was involved and deep down believed that he may be right. Thinking too much of Rhodes to believe he would go off with anything less than good reason. And thus he tasked Jimmy Woo and his team in helping hunt him down. Believing that since Woo was the one who fully believed in The Mandarin, thought that perhaps if put down the right trail while hunting Rhodes, he perhaps could help in taking down The Mandarin if he was truly real and involved.

He eventually manages to confront Rhodes outside of his War Machine armor where they have a brief scuffle. Rhodes eventually gets through to Woo and shows him a new piece of evidence he uncovered. Woo believes him, and decides to help Rhodes. It is not long after however that Rhodes is captured by men working for Hammer Industries, with the evidence he found being destroyed. Believing that he had only one more place to turn, Woo sought out Tony Stark.

He eventually met up with Pepper Potts who was able to direct him to Stark, as well as tell him about the death of Happy Hogan. After losing his company and suits, as well as compounding pressures in other fields Tony fell into his alcoholism. Woo went to him telling him about all that happened, and asked for his help in fighting The Ten Rings and Hammer Industries. Hearing that SHIELD was still stuck in a position of helping Hammer Industries, Stark did not show any enthusiasm over the situation. Not believing he, his girlfriend, and one lone agent stood a chance against such over-whelming odds. And thus initially refuses. Woo express his disappointment in Stark, and declares that he'll try even by himself. "Because that's what a hero would do."

Tony eventually manages to come around and joins up with Pepper and Jimmy. Tony asserts that they need to get him into Stark Industries so he can take control over his appropriated suits so they can use them. They formulate a plan to break into Stark Industries, during which time Tony sneaks into the suit vault where he is attacked by Ezekiel Stane whilst Woo gets into a fierce fight with Hammer security guards. After managing to narrowly succeed, Woo regroups with Tony who has captured Ezekiel.

With Ezekiel captured, and knowing how close he was to The Mandarin, demand he tell them the location of his lair. Through interrogating they also learn that The Mandarin's ultimate endgame is to release a modified aerosol version of Extremis across the globe. Only a small percentage of the world's population was genetically capable of surviving the bonding, but those left would become a "new and improved" breed of human.

After hearing about the incident at Stark Industries, The Mandarin becomes restless. Ordering his force of power suit soldiers called the Crimson Dynamo led by his right-hand-man Alex Su to destroy the makeshift SHIED headquarters (since the Helicarrier was destroyed in Captain America: The Winter Soldier, one of the reasons Mandarin believed it was the right time to fully enact his plans) as well as assassinate the Chinese central military command as well as destroying their communications systems and headquarters. (Them being the nearest military force to his lair, and thus forcing them to scramble in confusion would keep them from interfering) After hearing a message rom his mother post-mortem after years without contact, Ezekiel starts to re-think his position. He then tells Stark and Woo the location of The Mandarin's lair. They gather who they can. Woo manages to get his old team on his side again, while Nick Fury galvanizes the SHIELD agents he can muster to join up with them. Woo also manages to contact and old friend and war-buddy of his father, and currently a high-ranking officer in the Chinese military. Though he was bitter about Woo's father "abandoning" them, he felt compelled to believe and help his old friend's son, and move his troops to help him even though they were assigned to help try and control the chaos that ensues in China after the attack by the Crimson Dynamo. Tony, now having control over all of his suits again, manages to bring along the Iron Legion as well.

With their forces gathered, Tony leads an attack on The Mandarin's stronghold as he prepares to launch his attack. During the battle, Jimmy leads a large group of SHIELD agents, but they are faced with terrible odds. As the Ten Rings forces they are fighting are armed with weapons based on Chitauri technology designed by The Mandarin. During the fighting he is eventually confronted by Raza, a Ten Rings member who was the leader of the terrorist/mercenary cell that had kidnapped Stark in Afghanistan before his transformation into Iron Man. Raza pulls a knife on him while Woo has no weapon on him. The fight is fierce and Woo is given a severe cut, but eventually manages to grapple with Raza. By thrusting Raza's arm, he plunges his own knife through his neck, killing him.

After the battle is won, Woo is commemorated for his services by Nick Fury. Being so impressed with his work, he decides to put Woo in command of his own team.

Retrieved from "https://marvelcomicsfanon.fandom.com/wiki/Jimmy_Woo_(Earth-199999)?oldid=68364"
Community content is available under CC-BY-SA unless otherwise noted.