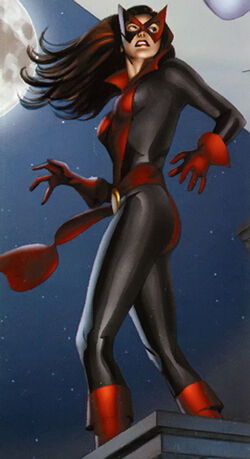 I'm a Mutant, and I'm sure as hell I'm not complaining. Once I'm a vigilante? Yeah, I know. I joined this Mutant team thing, and I don't give a damn f*ck if the authority saw me and wanted me arrested. And I don't fight for myself now anyway. I fight for the whole species of Mutants.

The Knightress in the Dark

Much of Jessica's past was unknown. However, Jessica was described as an "insanely troubled" individual. While her family characteristics are unknown, it has been implied that Jessica's mother and father abused her frequently, due to their "degrading mental health", and the fact that Jessica can be "beaten up a little longer" (due to her superhuman durability). While Jessica wanted to fight back, she felt that she couldn't do it because she's about to kill her parents in one punch if he wanted to retaliate. Jessica was said to have no place in her family, and her parents don't care about her. There has also been some statements about Jessica being raped in his childhood, and due to his traumatic past, she's an extremely aggressive individual. Some also implied that due to Jessica's Mutant nature, not only she got abused and beaten up by her parents, but other "inhuman acts" have been done on her.

Through an unknown way, Jessica finally managed to escape her parents, and survive in the streets until her teenage times. In her teenage

years, she actually enrolled in a college. However, it didn't last long. Jessica however, took a turn of life when she decided to become a vigilante in New York City (she was said to enroll in the college in Chicago). Jessica saw this as an opportunity of "covering her past" by doing "justice" to others. However, her vigilante acts put her in a jeopardy between she herself and the NYPD. She has actually been a primary target of the NYPD several times. She has committed several "unwanted heavy property damage", even if her fight's only with street-level criminals. At one point, she actually took down an apartment in a fit of rage.

Jessica, in her "Knightress" persona, would later be recruited by Magneto, along with several other Mutants, to his X-Men. Using the Cerebro Device that Erik designed a (considerably) long time ago in the past, Jessica along with the other (future) X-Men members were identified. Jessica's appearance actually surprises Magneto, as he actually knew about the "Knightress" vigilante. Magneto was delighted when he found out that Jessica was a Mutant, and never expected that. Jessica is the team's most rebellious and (possibly) violent member, as of her (former) vigilante nature, and traumatic past.

Jessica was a trained fighter and acrobat. She's also a multilingual person, able to understand some foreign languages. Jessica also stated that she's an autodidact.

Jessica has a lifting strength range between 15-20 tons.

Jessica's ears are vulnerable, and it can hinder her flight power, as to achieve flight, her equilibrium must be balanced.

Transportation: The X-Jet, her own flight power.
Weapons: None known.

Jessica was 21 when she joined the X-Men.