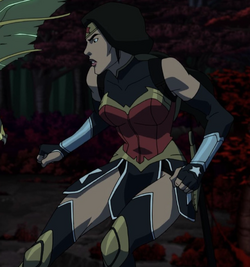 Ugh. Do we really have to go out and save the world?

Jessica Jones is a Potts International Hero, who gained super strength and flight after going through Terrigenesis. She and her husband, Luke, were dubbed Power Man and Power Woman, and based out of Detroit, where they raise their daughter, Danielle.

She is more willing than her husband to carry out some of Potts' dirty works, but wants to still be a genuinely good person for her daughter to look up to.

Retrieved from "https://marvelcomicsfanon.fandom.com/wiki/Jessica_Jones_(Earth-1515)?oldid=245042"
Community content is available under CC-BY-SA unless otherwise noted.