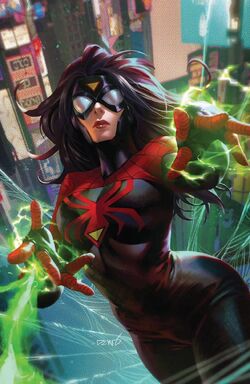 From now on, Spider-Woman fights back!

When Jessica Miriam Drew (born between the early to mid-1980s) was about a year old, her parents moved from England to a small enclave in the outskirts of Wundagore Mountain in Transia. Her father, Jonathan Drew, geneticist and research partner to the man who would later become the High Evolutionary, found large amounts of uranium in their property, which gave them the financial resources to build a research facility to keep working on their controversial studies of evolution, genetics and cell regeneration.

In the course of the next three years, life was good, until little Jessica became ill, poisoned by her long-time exposure to the Uranium that was so prevalent in their land. Jonathan, being an expert on the regenerative and immunological properties of arachnids' blood, injected Jessica with an untested serum made with the blood of several uncommon species of spiders, in the hopes of stopping the tissue damage and immunizing the girl from the Uranium radiation in her blood.

Then, he sealed her in a genetic accelerator created by the High Evolutionary to speed the process, but it only seemed to work at a very slow rate. In stasis for decades, her aging greatly slowed, she awoke with no memories of her past, to a world in which both her parents had disappeared mysteriously, and possessing powers that made everyone around her scared and resentful. Jessica lived in the Wundagore citadel until the High Evolutionary left the area after suddenly vanishing.

Remaining behind in the area, Jessica eventually found work as a barmaid in a nearby village. She also experienced her first romance, which tragically ended when an innocent prank panicked the young woman and accidentally triggered a bio-electric blast that killed her boyfriend. Accused of witchcraft and murder, Jessica fled from an enraged mob into the clutches of Otto Vermis.

The wealthy and deceptive Vermis offered sanctuary to Jessica, who didn't know about his double-life as a high-ranking leader in Hydra, an international terrorist movement and organization. Eventually, Jessica was later recruited by Hydra under the false pretense of Hydra being a force for good in the world. There she was trained by Taskmaster in martial arts and the effective use of her powers into becoming a deadly assassin.

Saved by the Spider-Man

Going by the name Spider-Woman, Jessica used her new alter-ego in order to track down her father's killer, starting her search in London. During this time Jessica was recaptured by Hydra and brainwashed into working for them, after having some second thoughts on leaving the organization. This brought her into direct conflict with the superhero Spider-Man, after encountering him in an attempt on assassinating the literate and influential journalist Ben Urich.

After Hydra's brainwashing was reversed by the web-slinger and Urich, she battled several Hydra operatives who was ordered by several superiors of Hydra alongside the Spider-Man and the efforts of Urich, who helped her defeat the incoming forces. Jessica left the scene in shame after realizing that she tried to murder someone. Days after the incident, Jessica somehow escaped the clutches of Hydra and momentarily relocated to Los Angeles and begin her career as a costumed crime fighter. While in Los Angeles, Jessica's battle with defected members of the Brotherhood of Mutants coincidentally made her encounter the S.H.I.E.L.D. agent Jerry Hunt (her now long-time boyfriend), who followed the mutant terrorists to Los Angeles as an order, in which the two's encounter would eventually developed the them to begin a romantic relationship not long afterwards. Due to the offer Jerry gave her, she eventually joined S.H.I.E.L.D. and vowed on protecting the lives of thew innocent ones.

After her reformation, she also became more recognized among the public after becoming a part-time member of the Avengers. As an Avenger, she became friends with the Kree-powered Carol Danvers (Ms. Marvel and later Captain Marvel), whom she considered to be the closest person she'll get as a sister. She even once had a brief romantic relationship with fellow Avenger Clint Barton, also known by many as the marksman Hawkeye, before it ended. Later on, she was offered another position by a subsidiary organization, becoming an Agent of S.W.O.R.D. after the aftermath of later events known as the Secret Invasion, a sub-division of S.H.I.E.L.D. that deals with extraterrestrial matters, led by Special Agent Abby Brand. Jessica had difficulties at first when it comes into dealing her task schedules as an Avenger, an Agent of both S.H.I.E.L.D. and S.W.O.R.D., and her own personal life. Although later, she somehow manages to stop worrying and starts to look more on the bright side, and was glad believing that her life was still wonderful, no matter how hard it was to her in some times, she still manages to reach out on to the top and fight back, even on her own.

Retrieved from "https://marvelcomicsfanon.fandom.com/wiki/Jessica_Drew_(Earth-61615)?oldid=268042"
Community content is available under CC-BY-SA unless otherwise noted.