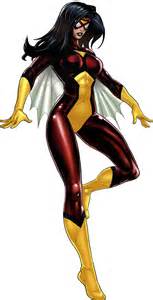 Little is known about Spider-Woman's life before the Masters of Evil's attack on the S.H.I.E.L.D. USS Alpha Helicarrier. It cam be assumed to be similar to her mainstream counterpart.

Spider-Woman was one of the heroes who was contacted by Nick Fury to join the Ultimate Alliance to stop Dr. Doom and the Masters of Evil from taking over the world.

During the Civil War, Spider-Woman was an ally on the Anti-Registraton. Spider-Woman is seen sealing a White Star base in New Jersey before attacking the Pro-Reg heroes. After her defeat, she was arrested (only to be freed by a counter-strike on S.H.I.E.L.D.). Spider-Woman was one of the many heroes who were considered dead. But was seen infected by the Fold, and she was guarding the Fold tower and attacked the heroes alongside Wonder Man.

Spider-Woman was later called in by the Ultimate Alliance once more to combat the Skrulls during the Secret Invasion.

Retrieved from "https://marvelcomicsfanon.fandom.com/wiki/Jessica_Drew_(Earth-6109.2)?oldid=128874"
Community content is available under CC-BY-SA unless otherwise noted.