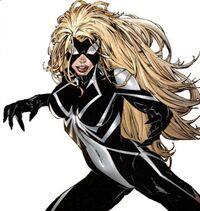 Earth-54321 version of Spider-Woman. Her history is about the similar as the 616 version.

After Jessica leaves Hydra, betraying them, destroying their base (As ruins) Madame Viper along with (Miles Warren)in underground laboratory creating a female clone of the Original Jessica Drew and named her Slik.

Seemingly those of the Jessica Drew of Earth-616.

Seemingly that of the Jessica Drew of Earth-616.

In Earth-54321 this version of Jessica Drew's life is same like her Earth-616 counterpart but her origin is based on Spider-Woman Origin comic until the clone project came in because my idea of Hydra with the help of Miles Warren taking the blood sample of Jessica creating their own weapon.

My idea of a clone team up are two clones of Wolverine Clone and Spider-Clone.

I give Jessica Drew the Arachne suit modified with gliding webbing armpits exactly like her Earth-616 counterpart with same powers.

Retrieved from "https://marvelcomicsfanon.fandom.com/wiki/Jessica_Drew_(Earth-54321)?oldid=259344"
Community content is available under CC-BY-SA unless otherwise noted.