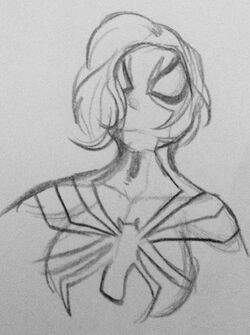 Single
Occupation
Spy, adventurer, terrorist
Education
Stopped education after 4th year
Origin
Origin
Genetic alterationsgave Jessica Drew superhuman abilities. She was trained by Hydra, and infiltrated S.H.I.E.L.D. as a sleeper agent. She had a change of heart after finding out that her father had ties to Hydra and how Hydra had mischievous plans for her. She is now an actual Agent of S.H.I.E.L.D., an Avenger, and an A-Force member.
Place of Birth
London, England
Creators

Jessica Drew lived in London, England with her father, Jonathan Drew. After her mom's death, Jonathan Drew took care of Jessica alone. After her father was murdered in her own house, Jessica ran away from home, leaving her starving on the streets, the same day Hydra planned an attack in the streets of England. They found Jessica and kidnapped her along with some other kids. Unaware to Jessica, she was implanted with Superhuman genetics and spider DNA which enhanced her abilities via a tarantula bite.

Jessica's first mission as a Hydra Agent was to kill Spider-Man, a vigilante who has killed the former Hydra leader, Eric Sarkissian. Jessica eventually wounded Peter, but he survived by the aid of S.H.I.E.L.D.

Jessica's second mission was to gather intel from S.H.I.E.L.D. and infiltrate the them. While she was at it, she met Patsy Walker, another one of Madame Hydra's former captives.

To get S.H.I.E.L.D.'s attention, Jessica and Patsy created a new persona for Jessica, who had similar traits to Spider-Man. Spider-Man eventually finds out about this. Though angered, Spider-Man forgave Jessica and asked her to make herself an original name, to differentiate her from him, thus calling herself Arachne.

Spider-Woman possesses a few superhuman abilities thanks to her altered genetics and DNA. These abilities are:

Skilled Martial Artist: Jessica is a highly experienced fighter trained in armed and unarmed combat under Madame Hydra through her affiliation with Hydra as an assassin. Although skilled as a martial artist, she was incapable of completely grasping various different principles of the formats she was intructed in. Her tactics integrate different methods utilized in Karate, Boxing, Capoeira, Judo and swordfighting. She later excelled at Martial Arts after joining S.H.I.E.L.D.

Equipment: Utility Equipment: Jessica has a utility belt and gun holsters to hold her equipment in battle. She also has an Energy Reserve Tube attached to her belt for whenever she needs to consume energy.
Transportation: None known.
Weapons: Twin Pistols: Jessica is mostly seen using Twin Pistols as her weapons.

Retrieved from "https://marvelcomicsfanon.fandom.com/wiki/Jessica_Drew_(Earth-1342)?oldid=259341"
Community content is available under CC-BY-SA unless otherwise noted.