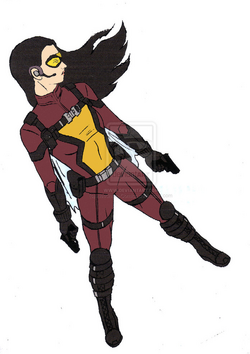 That's it, no more abuses, no more hindrances, no more letting the people step on me anymore. Now I have the power to become the best I can, I have friends who support me and I have someone in my life whose love keeps me going...yeah, things wll be good for me, and I will enjoy every part of the ride

Jessica is the only child of two former police officers from Nevada. Jessica's father died while on duty in a crossfire against a gang of Maggia members, being raised by her mother, who refused to retire from the force in order to keep providing for her daughter and to keep alive her husband's memory. When Jessica left for college, the Maggia Syndicate who killed her father made another hit, this time taking her mother's life. Jessica was left orphan and considered to leave her studies, but the Nevada Police Department allowed her to continue thanks to a scholarship. After she graduated college, she decided to follow the same path of justie as her late parents, determined to clean Nevada from these criminal groups

Jessica worked hard to advance within the ranks of the Nevada Police, but she still felt her efforts were very small, slowly making her lose her confidence, combined with her loneliness due to the absence of her parents, which was filled when she started a relationship with a mechanic called Will "Stilts" Day. Unknown to her, Will was actually an up-and-comer novice and local contact for the Maggia. He discovered who she is and decided to start a relationship with her in order to earn his place within the organization by "Eliminating the last Drew on the city". In spite of the rocky and sometimes abusive relationship due to her personal fears, she remained a valuable asset for the police, leading her to earn a place as a cadet for S.H.I.E.L.D.

On one of her earlier missions, she was sent along with a group of cadets in order to investigate an alien aircraft that crash landed on the Nevada desert, once they arrived, she discovered the sole survivor and tripulant, Kah-Rehl. Jessica managed to calm her down, feeling an unusual connection with her, feeling like she needed a good friend in her. During one of the test Kah-Rehl was submitted, her powers manifested and she escaped. Due to her being the head of the group, she took the blame for the incident, for which her superiors sent her to bring her back. Jessica searched for four days until she found her again. Once again, she managed to calm her down, but this time she felt their connection grow stronger, giving her a very valuable friend in her. Before she could bring her back to S.H.I.E.L.D. they were both surrounded by thugs from the Maggia syndicate. Jess held on her own for a while but she was in disadvantage due to her lack of skills and being disarmed, until Kah-Rehl took her shot and clear the area defeating them with ease. Thankful for helping her, Jessica decided not to send her back into custody but instead allowed her to live as her roommate. After contacting a hacker friend of hers and giving her a new identity as Carol Danvers, Jessica felt things were going great in her life.

However, things wouldn't be so bright when she was confronted days later by her boyfriend. After discovering that she was living with another girl, he decided to make his move into eliminating her, but he didn't count on Carol standing up for her and using her powers to blast him away. The incident caught the eye of S.H.I.E.L.D. and brought the both into custody. Jessca was fearful for what might happen to Carol, even above her own job, but Director Phil Coulson sympatized with her and allowed her to keep her job while Carol was recruited into the Avengers

Things were slowly getting back to normal in her life now that her closest friend and confidant works closely with her, but she was still being fearful about her abusive relationship wondering if her now ex-boyfriend will ever return, not to mention the large amount of mockery she has been receiving from the superior agents. One day, she overheard a group of cadets who were analysing the DNA Replicant Machine made by Peter Parker that gave him his powers as Spider-Man. Jessica was determined to end all her years of abuse and decided to step in and help them. Once the machine was set, they needed the Spider DNA in order to replicate the accident, but instead, they settled with a DNA sample from Peter, acquired from his regular medical check-ups. Jessica volunteered as the "test subject", eager to gain the powers of Spider-Man. As expected, the machine malfunctioned, in the exact same vein as the original incident, however, nothing showed up in the day after or the following days, meaning that it was all a failure. Jessica was pointed as the responsible for the whole incident by the other agents, being put on probation by orders of Director Coulson.

A New life as an Avenger

When Jessica's luck couldn't be any worse, she was reassigned to the night shift surveillance. On her first night, she was the first to discover the infiltration of a group of Skrull Soldiers heavily armed and breaking into the Triskelion headquarters. She was helpless while she watched how they managed to not only take down all the coming agents, but also shcokingly giving the Avengers a hard fight. When she saw Carol being beaten on the screen, she couldn't take it anymore and went straight into the battle, armed with only a small plasma cannon she confronted the imposing Skrulls who swiftly defeated her with ease, however she kept standing over, finally fed up with being abused and the constant harassment she received in life prompted her to make a stand and keep fighting. Just as the skrull was ready to make his move, Jessica had a sudden rush of adrenaline that promted her to jump into the wall and then the floor. Everyone present, including Jessica, were surprised that she leapt as a spider, making her realize that she indeed gained Peter's powers, but they had a delayed effect. With her new powers in hand, she put up a fight against the Skrulls, putting her powers on a "test drive". While she didn't inflict much damaged on them, she did gave the Avengers and the remaining agents enough time to regroup and attack back, finally defeating them.

After the battle, Director Coulson asked for a private meeting with Jessica. After witnessing her powers and her newfound determination, he decided to end her probation, telling her that she is no longer required to perform her duties as an agent. Fearing that she was fired, she begged Director Coulson for another chance, to which he replies that he wasn't done talking. He discovered her new powers and after an analysis with Peter himself, he revealed that, since she was replicated with an hybrid DNA instead of a pure DNA, her powers are on a lower scale than the original spider, but still a valuable asset for them, so Coulson finishes it by revealing that, by the Captain's orders, she's been promoted above Level 10. She is shocked and confused after she leaves the meeting and comments what Director Coulson said to a pair of agents who look stunned when she said that. She asked what he meant and her fellow agent replied that there is only one thing above Level 10, and that's being an Avenger, making Jessica realized to her delight that she was recruited into the Avengers.

She celebrated back home with her friend and roommate Carol, who was equally happy about her reward. After a lenghty talk, where she thanked Carol for being with her and giving her the much needed support she always craved, she came to realize that she has strong romantic feelings towards her, to wich she finally gives in, marking the start of their relationship

Spider-Woman possesses the same powers of Peter Parker (Earth-120986) since his DNA was replicated into Jessica's, however, since it was a replication of human/spider genes instead of pure spider genes, her powers are on a lower power scale than Peter's. Her powers include:

Retrieved from "https://marvelcomicsfanon.fandom.com/wiki/Jessica_Drew_(Earth-120986)?oldid=150551"
Community content is available under CC-BY-SA unless otherwise noted.