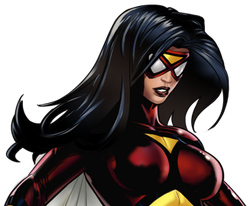 First appearance
Cut One Head Off...

When Jessica Drew was about a year old, her parents moved from England to a small enclave in the outskirts of Wundagore Mountain. Her father, Jonathan Drew, geneticist and research partner to the man who would later become the High Evolutionary, found large amounts of uranium in their property, which gave them the financial resources to build a research facility to keep working on their controversial studies of evolution, genetics and cell regeneration.

In the course of the next three years, life was good, until little Jessica became ill, poisoned by her long-time exposure to the Uranium that was so prevalent in their land. Jonathan, being an expert on the regenerative and immunological properties of arachnids' blood, injected Jessica with an untested serum made with the blood of several uncommon species of spiders, in the hopes of stopping the tissue damage and immunizing the girl from the Uranium radiation in her blood.

Then, he sealed her in a genetic accelerator created by Herbert Wyndham (aka the High Evolutionary) to speed the process, but it only seemed to work at a very slow rate. In stasis for decades, her aging greatly slowed, she awoke with no memories of her past, to a world in which both her parents had disappeared mysteriously, and possessing powers that made everyone around her scared and resentful. Jessica lived in the Wundagore citadel until the High Evolutionary left Earth.

Remaining behind in the area, Jessica eventually found work as a barmaid in a nearby village. She also experienced her first romance, which tragically ended when an innocent prank panicked the young woman and accidentally triggered a bioelectric blast that killed her boyfriend. Accused of witchcraft and murder, Jessica fled from an enraged mob into the clutches of John Garrett. The man offered sanctuary to Jessica, who didn't know about his double-life as a high-ranking leader in Hydra, an international terrorist movement.

Vermis trained Jessica in the use of her powers and taught her espionage, martial arts, and various killing techniques. Hydra wanted to mold Jessica into the perfect assassin. However, she rebelled on a basic level against them, going so far as to deviate from their conformity by making her first costume red instead of green and choosing the Spider-Woman codename for herself.

Skilled Martial Artist: Jessica is a highly experienced fighter trained in armed and unarmed combat under the Taskmaster through her affiliation with Hydra as an assassin. Although skilled as a martial artist, she was incapable of completely grasping various different principles of the formats she was intructed in; which infuriated the Taskmaster. Her tactics integrate different methods utilized in Karate, Boxing, Capoeira, Judo and swordfighting.

Multilingual: Due to her Hydra espionage training, she is fluent in several languages, including Russian, Japanese, French, Spanish, Portuguese, Korean and German.

Retrieved from "https://marvelcomicsfanon.fandom.com/wiki/Jessica_Drew_(Earth-1010)?oldid=259347"
Community content is available under CC-BY-SA unless otherwise noted.