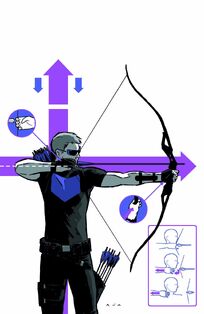 Marvel: The New 52
Base Of Operations
S.H.I.E.L.D warehouse
Characteristics
Gender

Hawkeye is a character that will be part of the New 52, but will portray a bigger role that he did in the previous comics. This Hawkeye is the son of Peter Quill/Star-Lord and an unknown woman.

Jensen Quill was born on the 2nd of July, 1988 to Peter Quill and an unconfirmed woman. Jensen was raised by Peter after his mother died saving people from a fire she had nothing to do with. Peter took Jensen to a variety of planets during his childhood, causing him to learn a lot from their cultures. As Jensen was home-schooled, he learned things twice as faster as kids normally would. Jensen had heard about the Chitauri attacks when he was 13, when he developed a liking to Hawkeye. Jensen scanned his father's intergalactic computer to find out who he was. At the age of 16, Jensen discovered that old circus performer Clint Barton was Hawkeye, and planned to meet him. One day, Jensen was walking home with his friend Emma Larter when he heard a crash from his house. He walked in and saw Thanos asking his father for the location of the Infinity Gauntlet, Peter told him no and was stabbed through the chest and thrown into the garden. Jensen ran to Thanos to attack him only to be pushed away and knocked unconscious.

Jensen woke up in the hospital next to his idol Clint Barton, who told him that he knew his father, and that he wanted to help Jensen as much as he can. Jensen then trained for a year and a half, later returning to his closed-down home and entering his father's computer room, where he spent three weeks looking at aliens, super villains and Super Heroes. Jensen then took his father's motor bike to California, where he knocked on Tony Stark's door. An Iron Man suit opened it, asking him to come in. He was greeted by Jarvis 3.0, he walked in and found Steve Rogers building a new suit, and asked Steve where he could find the Avengers. After Jensen found Steve, he helped him make a new suit in exchange for 12 superheroes.

When Jensen was walking in his town, he realized that across the road was a mugging and on the other side a robbery in a Small market realizing he could only do one he ran towards the mugging he knocked the man out and handed the woman her purse after he saw that a female in Black had stopped the mugging following her to ask who she was, The Woman kicked Jensen to the ground and ran after reading more about her, he decided to track her down. He then staged a Robbery by paying the market man 50 dollars so that he would cooperate he pulled out a gun then when the woman came he ran away ensuing a chase he lead to a rooftop where he fought her and then unmasked her and found out she was Emma Larter his childhood friend, revealing himself he tried to hug Emma, who knocked him out.

He awoke in her basement, she asked what he was doing when he revealed what happened after his father died. After explaining, he heard clapping and turned around to find Nick Fury who shot him with a tranquilizer. Awaking in a bed he left and found himself on the Helicarrier he asked Fury why he brought him in when he told him that the exact location of the Hulk went global 2 days ago and that half of the country where on their way to his location and that him and Emma codename: Black Widow will go.

Hawkeye and Black Widow arrived at a Buddhist temple where they had swore to protect Bruce no matter what until he walked out and said he would go with them. While saying farewell Bi-Beast, Red-Hulk and Abomination arrived. Red-Hulk wanting revenge for his daughters death.

Equipment: Hawkeye's Quiver: Hawkeye's quiver is supplied with a multitude of different arrow heads in the bottom. By dialing up an armament setting from a control on his bow, Hawkeye can cause the quiver to affix these special arrowheads. This effectively increases the capabilities from conventional arrows, to explosive arrows, a grapple line, and more.
Transportation: Quad Bike (used in North and South America), Stealth Jet (rest of the world)
Weapons: Hawkeye's Bow The bow is capable of folding on itself (most likely for either easier transport, concealing it, or both) & has a selector and transmitter that allows Hawkeye to control his mechanical quiver. It also has a laser sight.

Retrieved from "https://marvelcomicsfanon.fandom.com/wiki/Jensen_Quill_(New_52)?oldid=231456"
Community content is available under CC-BY-SA unless otherwise noted.