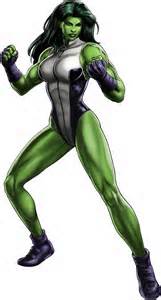 For unknown reasons, the Skrulls started the Secret Invasion on Earth. This Skrull posed as Avenger, She-Hulk. He teamed up with a Daredevil Skrull and attacked a S.H.I.E.L.D. prison transport holding Sinister Six member Rhino. A squad of heroes consisting of Spider-Man, Wolverine, the Hulk, and Deadpool responded to a sent distress call from the transport. Naturally, they fought Rhino with the Skrull imposters, until incapacitating the She-Hulk Skrull which revealed her true form upon unconsciousness. She fought the squad & Rhino again once she woke up, with Taskmaster dealing the death blow after stumbling across the fight.

Retrieved from "https://marvelcomicsfanon.fandom.com/wiki/Jennifer_Walters_(Skrull)_(Earth-6109.2)?oldid=123197"
Community content is available under CC-BY-SA unless otherwise noted.