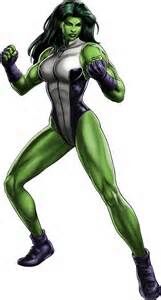 Single
Occupation
Private attorney, adventurer; formerly actress, NYC Assistant District Attorney
Education
Law degree from UCLA
Origin
Origin
Jennifer was shot by mobsters while being visited by her cousin, Bruce Banner, a.k.a. the Hulk. A blood transfusion from Banner was necessary to save her life, a side effect of the gamma-irradiated blood was that she mutated into She-Hulk
Place of Birth
Los Angeles, California
Creators

Little is known about She-Hulk's life before the Stamford Incident. It can be assumed to be similar to his mainstream counterpart.

She-Hulk arranged the plea bargain for Robbie Baldwin after the incident at Stamford. Later, she among the heroes that supported the SRA. She later became a member of the reformed Ultimate Alliance. She was stationed at Stark Tower with Colossus and Hercules. She reported the repeater towers set up by the Fold. When the collective attacked Stark Tower, only Hercules managed to escape uninfected. She and Colossus later turned up in the tower in Iceland as lines of defense along with other Fold agents.

At some point later after the Fold's defeat, she was kidnapped and replaced by the Skrulls.

Retrieved from "https://marvelcomicsfanon.fandom.com/wiki/Jennifer_Walters_(Earth-6109.2)?oldid=159530"
Community content is available under CC-BY-SA unless otherwise noted.