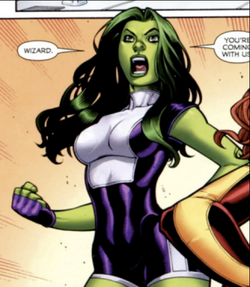 Earth-53
Base Of Operations
The Outside
Characteristics
Gender

Back on my home world, everyone knew my name. For a while, I thought it was all I could ask for. But it just left me feeling empty. I wanted to be a hero, but I'd just been reduced to a show pony. Being with the Outsiders? It gave me a sense of worth. But it was you who made me feel whole again.

Jennifer Walters was studying to become a lawyer when she visited her cousin, Bruce as he was working on his gamma bomb project. However, the project went awry and Jen was exposed to gamma radiation, transforming her into a super strong being dubbed the Hulk. Giving up on her dream of being a lawyer, she tried to use her powers to help people in a more direct way as a superhero. However, when she found herself in need of money, she met J. Jonah Jameson, who agreed to represent her in Hollywood. She quickly became a sensation and was even recruited to join the Avengers. However, she believes they only chose her to boost their own popularity and that they didn't really take her seriously as a hero.

Hulk was recruited to the Outsiders under the threat that if she returned to her reality, Bruce would be in a severe accident and require a blood transfusion from her. The resulting mutation would turn Bruce into a mindless monster called the Abomination. Not wishing to condemn her cousin to such a fate, she agreed to become an Outsider. She quickly found her place on the team who saw her for the hero she was, and never once doubted her ability to do good. She would even end up falling in love with Sabre, even going so far as to try and sacrifice herself for her on a mission against the Kree. They would instead end up saving each other and confessing their feelings, resulting in a kiss.

[[Category: In a relationship with Rachel Grey Characters]]

Retrieved from "https://marvelcomicsfanon.fandom.com/wiki/Jennifer_Walters_(Earth-53)?oldid=246138"
Community content is available under CC-BY-SA unless otherwise noted.