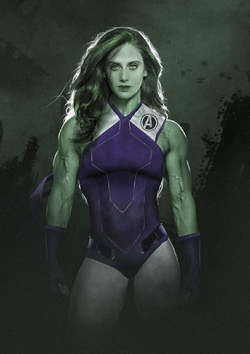 Don't make me say the S-Word.

Jennifer Walters was a calm and collected lawyer who just so happened to be cousins with the incredible Hulk. This relation led to her getting in constant trouble, eventually requiring a blood transfusion from her cousin for her very survival.

This mutated her physical form permanently, but she maintained her intellect. Quickly earning the nickname "She-Hulk", she joined the Avengers and went on to fight against the Order of the World Tree.

Despite fighting nearly to her last breath, She-Hulk was whisked away into the escape to Latveria, where she has assisted in rebuilding S.H.I.E.L.D. and the Avengers.

Retrieved from "https://marvelcomicsfanon.fandom.com/wiki/Jennifer_Walters_(Earth-2001)?oldid=262259"
Community content is available under CC-BY-SA unless otherwise noted.