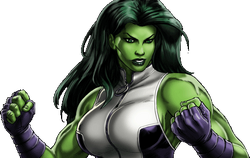 Divorced
Occupation
Formerly attorney, Magistra of the Living Tribunal, formerly NYC Assistant District Attorney
Education
Law degree from UCLA
Origin
Origin
Jennifer was shot by mobsters while being visited by her cousin, Bruce Banner, AKA the Incredible Hulk . A blood transfusion from Banner was necessary to save her life, a side effect of the gamma-irradiated blood was that she mutated into She-Hulk.
Place of Birth
Los Angeles, California
Creators

Jennifer Walters, the meek and mousy lawyer cousin of Bruce Banner, was the daughter of Sheriff Morris Walters. Agents of Nicholas Trask, a crime boss who had crossed paths with her father, shot and seriously wounded her on a day when her cousin was in town. Bruce gave her a blood transfusion, as no other donors of her blood type were available; the radioactive blood mutated Jennifer as it had her cousin, transforming her into the She-Hulk.

Although Jennifer was at first savage while in her form as She-Hulk, she eventually gained the same intelligence she had as the normal Jennifer Walters. She quickly came to appreciate the confidence and assertiveness that had come with being She-Hulk. For a long time, she felt more comfortable in her form as She-Hulk than in her "normal" form as Jennifer. But she has gradually grown comfortable in both forms, and realized that she has much to offer the world in both her forms.

Physical Transformation: As a result of a blood transfusion from her cousin Bruce Banner, AKA the Hulk, Jennifer Walters is able to alter her physical form into a female version of the Hulk. As She-Hulk, Walters' skin, hair, and eyes all turn green. Her frame also gains another 9 inches in height and 560 lbs of muscle and bone tissue. Unlike her cousin, the Hulk, much of Jennifer's gained muscle and bone mass is condensed and several times as dense as that of a human. As a result, though she is noticeably much larger than she is in her normal form, she looks much lighter than she actually is. Also unlike the Hulk, or rather certain Hulk incarnations, Jennifer retains her full intelligence and personality in her She-Hulk form. Most of the time, Walters is able to control her transformation, enabling her to change back and forth at will. Thus, her specialized adrenal gland is not as advanced as that of the Hulk. And while it can augment her abilities, she can still remain more in control than the Hulk.


Superhuman Strength: As She-Hulk, she is proportionally stronger than her Jennifer Walters form. This means that any extra strength gains as Jennifer Walters through intense physical training will be amplified, making her She-Hulk form that much stronger. As a result of her intense training, She-Hulk's calm strength currently surpasses the base strength levels of the Gray, Savage, and Professor incarnations of the Hulk, at least while they're in a calm emotional state. It has been stated and shown that like her cousin, her strength increases with her fear and rage. She-Hulk's strength has extended into her highly developed leg muscles, enabling her to leap great distances or heights.


Superhuman Speed: Due, at least partially, to the great muscular strength and development of her leg muscles, she is capable of running and moving at speeds that are beyond the natural physical limits of the finest human athlete.


Superhuman Stamina: She-Hulk's highly advanced musculature produces considerably less fatigue toxins during physical activity than the musculature of an ordinary human. She can exert herself at peak capacity for about 48 hours before fatigue begins to impair her performance.

Superhuman Durability: She-Hulk's body is highly resistant to all forms of conventional injury. Her skin is capable of withstanding tremendous pressures and temperatures, falls from great heights, field-artillery canon shells, and powerful energy blasts without sustaining any injury.


Superhuman Agility: She-Hulk's agility, balance and bodily coordination are enhanced to levels that are beyond the natural physical limits of the finest human athlete.


Regenerative Healing Factor: Despite her body's extremely high resistance to injury, it is possible to injure her. However, she is capable of rapidly regenerating injuries that result in great tissue damage and blood loss within a matter of minutes. However, she is not capable of regenerating missing limbs or organs. She-Hulk's highly efficient metabolism renders her immune to all drugs and toxins as well as total immunity to all known Earthly diseases.


Body Switch: Thanks to training by the Ovoid alien race, She-Hulk can exchange her physical characteristics and powers with the physical characteristics and powers of another being by simply focusing on a mental image of the person and willing the transfer to take place. The actual intent of the Ovoid skill is to exchange the minds of the user and another being, but it was theorized by the Ovoid who trained the She-Hulk that some factor of her gamma-mutated physiology causes her use of this talent to manifest in a different way. She rarely uses this power; unless she initiates this exchange with another superhuman being, she will become basically human in ability, but still green-skinned and generally recognizable as the She-Hulk, and thus vulnerable to attack, a fact that the super-villainess Titania took advantage of the one time the She-Hulk did use this ability.

Expert Combatant: The She-Hulk is a formidable hand-to-hand combatant. Even in her Jennifer Walters form, she possesses sufficient skill in the martial arts to dispatch several would-be muggers much larger than she is. She is also highly trained in the use of weapons and battle tactics and strategies.

Expert Attorney: Extremely intelligent, the She-Hulk is a skilled and experienced lawyer. She has won many cases proving various civilians, costumed heroes, and even villains innocent.

Gifted Intellect: In spite of the character's party-girl image, she is a bona fide intellectual, being one of the few superheroines to have attained an advanced post-baccalaureate degree. Jennifer attended UCLA School of Law, where she was a member of the Order of the Coif, a national merit society for top legal scholars. It is revealed in the Savage She-Hulk that Walters has also attended Harvard Law School; though details are not provided, it is probable that she earned a master of laws (LL.M.) degree at Harvard to complement her juris doctor (J.D.) degree from UCLA. She has shown great versatility in her legal practice, representing criminal defendants, corporations, and even domestic violence victims.

Varying in degree depending on her level of exercise and anger or fear level. The comparison scale lists her as a "class 100+" (although it only exists for comparisons between characters), and after prolonged weight lifting training to defeat the Champion of the Universe. After they arm wrestle, it is implied that She-Hulk's strength is perhaps superior to that of Hercules, though that is not made clear.

Radiation: Exposure to certain wavelengths of radiation only at very high doses can sometimes temporarily inhibit or override her ability to transform between forms. This is usually only a weakness if she is exposed during her original/Jennifer form.

Equipment: None known.
Transportation: Usual vehicles used by the team she is with, She-Hulk's flying car.
Weapons: None.

Retrieved from "https://marvelcomicsfanon.fandom.com/wiki/Jennifer_Walters_(Earth-1010)?oldid=101944"
Community content is available under CC-BY-SA unless otherwise noted.