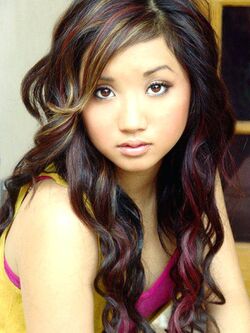 Freak? Hexgirl? Miss Fortune? Those names are in the past, now. You can call me by actual name -- Psylocke!

Psylocke was born Jennifer Meilin Huang in San Francisco, California. She is the youngest of three children and her childhood wasn't the best either. For starters, her parents fought constantly when she was younger and her father would have numerous affairs with various women and men and her mother would constantly drink and get high on drugs.

She, along with her older siblings, Garrick and Alyssa would get abused, physically and verbally by her mother, blaming them for the wreckage of her marriage. Jenny would take most of the abuse because she was the youngest, being called names like 'worthless', 'disgusting', 'abomination', etc, making her believe that she is those things. Despite her siblings trying to comfort her, Jenny would often start to feel insecure about herself.

As she grew up, her mutant powers began to surface and one day, her mother got so angry at her, she began beating her while her siblings tried to intervene, but was knocked away by her mother. That's when Jenny finally snapped and unleashed her psychic energy at her mother, which injured her greatly. This caused her to call Jenny a monster after she saw what she had done and it didn't take long for social services to remove both her and her siblings from the home.

Jenny was soon put in a foster home where she was welcomed by a loving family, however, she would keep a distance from them due to what had happened with her and her abusive mother, which she didn't want to happen to them either. Her life in school wasn't helping either -- she experienced bullying until high school and teachers tried their best to help her, but she pushed them away.

The bullying had gotten so bad that one day Jenny snapped again and her psychic powers were exposed as she nearly destroyed the hallway, and injured most of the students. Horrified at what they saw, most of the students began to label her a 'freak' and Jenny quickly left the school and hurried home, locking the door to her room. Her foster parents and her siblings tried to have her open the door, but she refused. Realizing that her new family wouldn't accept her if they found out about her powers, Jenny decided to run away from home, not even bothering to look back, dropping out of school as she left.

By taking the train, Jenny left the Bay Area behind and arrived at the Big Apple, where she was surrounded by many people she didn't know. However, when she was attacked by a group of thugs, she began to use her psychic abilities and everyone discovered that she was a mutant. Jenny tried her best to get away from the crowd due to the city being known to be inhabited by mutants. She was later encountered by a group of mutants who were ostracized by everyone in the city. She told them about what happened and she showed them her powers. Gaining the attention of Seth Wilhelm, a mutant who was born with large black wings and darkness-based powers. He told her that no one accepted them because of their powers and will never accept them, talking her into joining the group. Jenny accepted the offer and she soon became smitten with Seth.

She remained in the group until she was encountered by Salem Jones-Whistler, who was part of the New X-Men, and Jenny soon became trapped in the crossfire when she was told that Seth and the others were part of the Brotherhood of Evil Mutants.

Psycho-Energokinesis: Jenny has the ability to generate and manipulate psychic energy, shaping it into different forms and constructs. Her powers are mainly driven by negative emotions due to the abuse inflicted on her by her mother and her mistrust as a result.

Equipment: Her X-Suit
Transportation: The X-Jet
Weapons: No official weapons. Her weapons are mainly constructed from psychic energy.

Retrieved from "https://marvelcomicsfanon.fandom.com/wiki/Jennifer_Huang_(Earth-7090)?oldid=261429"
Community content is available under CC-BY-SA unless otherwise noted.