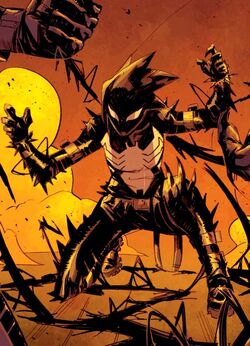 Earth-61615.8
Base Of Operations
Mobile across New York, and Iowa
Characteristics
Gender

Ever since my father died, I have always been fighting for what's right. And I didn't even give a $h!t, even if I felt that was not so special... But now that I have that power and responsibility Peter Parker may or may not have left to me, I have to fight harder. Harder than I ever did before...

Jennifer Marie Hathaway was born in Des Moines, Iowa. Raised by her both her parents, she continued to serve a normal and even a very wonderful life, regularly attending a world class academy in her high school days to keep pursuing her desired career as a future actress, until the age of 15, when her father, Stan, had unexpectedly met his own fate at the hands of Chitauri and Outrider forces during the great, extended Chitauri Conflict. Along with losing her own father, she had only learned of the revelation that he was a heroic mutant vigilante who sacrificed his own life to save others no matter the cost, as was told by her mother at some point after his funeral. Jennifer contacted the Xavier's School Institute for Higher Learning requesting them with a proposal to join their educational institute as an act of honoring her father's noble memory, and the hopeful assumption that she might also be a mutant, just like her old man.

They accepted her sincere request, however, upon arrival it was discovered that she wasn't an actual mutant at all. The kind and noble Professor Charles Xavier informed her of her status as a non-mutant, although he still advised advised her that he saw a lot of potential within her, knowing that she was already prepared to be a trainee in becoming an eventual hero. Inspired by Xavier's motivations despite knowing she wasn't a mutant, she decided to stay at the mutant-supported institute to continue her education there, temporarily moving to a boarding house near the X-Mansion for a long while way from Iowa, and speak her undying advocacy supporting mutant rights across New York, starting with the mostly peaceful Westchester County of the popular state.

At first, Jen had to accept the harsh truth when her own girlfriend decided to break up with her, admitting to her that they were just "too different" in accordance to their desired passions in life, with her moving to Westchester, while her girlfriend had always been planning to go abroad to pursue her career. Eventually, Jen had moved on with her life despite her painful acceptance to choose her new life-long goal, believing it would be for the better.

While travelling across the state of New York with her newfound friends from the institute on a quite fun weekend, Jen and her friends came across witnessing the great friendly neighborhood web-slinger himself, the vigilante Spider-Man, swinging across the city of New York as he goes to interrupt an ongoing scene that was a battle between two enhanced criminal organizations, the Venom League and the Frightful Four. Astonished and amazed by her first ever close encounter to one of her all-time favorite superheroes fighting crime for the greater good and safety of others, Jen could only feel so much blessed and thankful that she made a decision she never fully regretted, with her hopes of eventually and actually meeting her great idol in person seeing him and many other heroes appear throughout the famous city and state.

Only a few weeks later, the original Spider-Man, Peter Parker himself, died saving his family and friends from Norman Osborn and the majority of his entire Rogues Gallery, who just escaped their imprisonment from the Raft caused by a secret perpetrator. Jen and her closest friends arrived pretty much late to the scene after she heard several explosions during the slinger's final battle. Stricken with intense grief at not having the chance nor opportunity of helping Peter Parker before his demise, Jen could only break down in tears to see her greatest hero go right before her eyes.

She runs off somewhere on her own, much to her friends' concern towards her, where she greatly mourned in an alleyway. Unfortunately, at that same moment, Jen was unaware that an Alchemax-mutated symbiote was able to find her way near Jen through the New York sewers. In a response to the symbiote attempting to bond with her, a panicky and ultimately scared Jen heads to the open streets, heavily disoriented, greatly feverish, and extremely ravenous. Much to most of the bystanders who felt concerned towards her, Jen exhaustively tried to ask for their help, only to faint afterwards, collapsing on the ground.

As the bystanders called for an ambulance, the latter eventually arrived to help her seemingly worsening condition, taking her to Metro-General Hospital. However, on their way to the hospital, the very ambulance carrying a catatonic Jen had unexpectedly hit by a large debris, carelessly and sadistically thrown by an unnamed successor of the Rhino mantle, who apparently was also deemed to be a serial killer. The ambulance crashes into an abandoned store, killing most of the crew inside the subsequently destroyed vehicle, left for Jen who was still barely alive and was in critical condition due to the crash.

Slowly opening her eyes, she could only look at the humongous and terrifying villain pick her up with his own bare hands, much to her absolute terror as he ferociously takes her to an unknown location across the streets of New York City. Thinking about her own mother, friends, and the rest of her loved ones who are still out there worrying what might have happen to her, Jen emotionally screams "No!" in fear of losing the chance to be with them, as she gets slowly covered in the symbiote, transforming Jen into a oily-black monster with white eyespots and veins, claws, striking a great resemblance to the appearance of the infamous Spider-Man rogue, Venom, subsequently fighting Rhino off, for her own and others' lives threatened by the Rhino's chaotic actions.

Thanks to the unmatched might and power of the new symbiote, the latter was able to take down the Rhino, fully taking him down in the process. As she once again fainted into the ground out of fatigue, an individual catches her as she fell, revealing to be one of her teachers at the institution, Wolverine, who then took her under momentary care of S.H.I.E.L.D.'s search and rescue team (under the request of Nick Fury) to the Triskelion in the meantime as they figure out her condition, after unintentionally bonding with the new mutated symbiote.

Now realizing that she was bonded with a mysterious symbiote that granted her a great power of great potential to do such great things, Jen would eventually decide to follow and live Parker's philosophy given to him by his Uncle Ben, "With great power comes great responsibility," something that she first heard during Parker and Felicia Hardy's (Black Cat) funeral, and continue Peter's, along with Felicia's, legacy as a noble hero of New York as long as she can. Embracing the new and unique symbiote within her to become a heroic vigilante in dedicating both Parker's and her father's legacy to live on and protect the innocent ones, including mutants, along with accepting guidance from her righteous mentors and allies, she was eventually dubbed by the public as Adamant.

Adamant Symbiote: Hathaway had gained the powers of the mutated duplicate of the Venom symbiote, after it permanently bonded with her. These powers had been transferred to Hathaway, so long as she wears the alien symbiotic suit, and combined with each other physically stronger than most of the superhumnans she had encountered as the Adamant. The symbiote gave her many powers, which included: