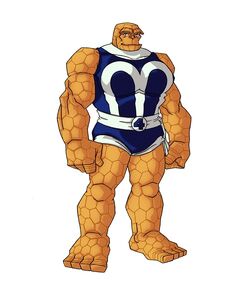 Black
Unusual Features
Jennifer's eyes are cloudy due to her blindness, and she has an alternate form made solely of rock.
Status
Marital Status

The Thing and Alicia Masters met when she infiltrated the Fantastic 4 at her father's request. However, they still fell in love. After a while, they saw that the rest of the Fantastic Four were having children, and they decided to try. There were some complications, as the baby was too big for Alicia to carry. But Reed was able to create an exact womb-like environment that was twice the size. After about 6 months of this environment, a healthy baby girl was born, and she was named Jennifer.

Jennifer had a mostly good childhood. Her home life was wonderful. She loved her mother and father. But her school life was terrible. She was pulled out of school and home-schooled by her godparents, Mr. Fantastic and the Invisible Woman. She received a terrific education under them. And when she turned 13, she morphed into her father's Thing form. She was unwillingly stuck in this form for weeks, but she turned back into her old self again.

She began training in her Thing form, and soon showed to be stronger than her father. However, for an unknown reason, her strength diminished when she beat her father. She didn't care though, when Daniel tried to bully her, she was able to fend him off. And when Luna joined the team, Jen decided she should be allowed in, though she soon found she did not like her attitude. Despite what she brought to the table, she took some of the emotion away as well. But Jen was able to make friends with her, which basically kept her from being kicked off the team.

Rocky Transformation: She-Thing possesses the ability to transform her skin and tissues to an organic rock.

Super Stamina: She-Thing was capable of fighting for hours without tiring, as her rock muscles produced no fatigue poisons.

Invulnerability: She-Thing cannot be harmed by any conventional means.

Slowed Aging: Jennifer does not age in her rock form, but she does age in her human form.

Jennifer is a master of powered and depowered combat.

Equipment: Jennifer utilizes a headset designed by Peter Richards that enables her to see in her Thing form (in a Daredevil-type radar sense fashion).
Transportation: None known.
Weapons: None known.

Retrieved from "https://marvelcomicsfanon.fandom.com/wiki/Jennifer_Grimm_(Earth-1175)?oldid=58092"
Community content is available under CC-BY-SA unless otherwise noted.