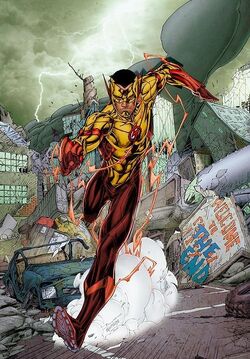 All my life, all I ever did was running away from my own past mistakes, but then, I realized something... You can never outrun them, nor you can stop... All you have to do is keep running, and you'll be just fine...

Jeffrey Stanley Walters was basically just like anybody else, an orphaned teenager who was struggling to deal with his normal life and his also, his struggle to deal with his over-weighted body. He had to cope with being a learning student at the world-famous Erskine University and briefly Lawbound for his college education as the student of professor Matt Murdoch, and at the same time working part-time as the manager of a fast food restaurant named "Walters' Bistro," his family's own restaurant since the early 19th century.

All of his life, he had felt that nothing will ever change in his miserable life, until the mysterious cosmic event known as the "White Outburst" changed his genetic structure as a result of a retro-virus caused by the event, turning Jeff into an advanced superhuman, giving him the ability to move at superhuman speed but making it impossible for him to stop moving and leaving him in continual need of huge quantities of food to keep his accelerated metabolism going. He rapidly lost weight and took on a notably more athletic appearance when his paranormality slowly kicked in.

Upon discovering his powers, Stanley decided to keep them a secret while he trained to be vigilante in secret, helping those who are in need even without the need of authoritarian permission. During his slow rise gaining notoriety as an urban legend known as the "Louisville's Blur," he grew more and more supporters throughout the small community, and as well as a group of people who became obsessed against the Blur and other vigilantes, believing that they shouldn't trust them and their supposedly "heroic agendas".

Not only did Jeff rose into fame as a hero in secret, but so was his dining business, which has has kept on improving, until he was eventually confronted by the infamous philanthropist and multi-billionaire, Kyle Richmond during a formal party, who gladly gave him an offer for a position at Richmond Enterprises, believing that there was a potential to the kid when it comes into business. Jeff had the thought of reconsidering accepting the offer, but he still kindly declined Kyle's offer in the very end, since he didn't want to abandon the business that his family had started from the very beginning.

At some point in time as the vigilante speedster Blur, he had also banded together with other famous heroes across New Troy and many other parts of America and the rest of the entire world, who also came to mutually form together the private superhero team known as the Squadron Supreme, with their life-long goal being to sincerely protect the entire world from the emergence of all evil forces at any cost. something that a single hero couldn't ever handle and defeat.

Unbeknownst to Jeffrey, he was one of the most suitable candidates of the Squadron Supreme, a team of extraordinary individuals secretly compiled and assembled by the U.S. government, composing individuals, either with superpowers or other special characteristics. Its purpose is to protect world stability from inner or extraterrestrial threats, and to work with the peaceful interests of the whole world. While some of the team's missions are international in scope and have a "positive public relations" aspect, others are covert and apparently involve military strikes and assassinations, though these negative sides were too much, believing for these ways to be extreme and immoral towards handling any form of crime.

The team project was already scrapped and the first secret incarnation of the team was disbanded by the president, believing that each and every superhero would be better on their own without them having to be involved with the government's classified agendas, but due to the unexpected arrival of the mysterious, enormous, and powerful extraterrestrial entity known as the Null the Living Darkness, the authorities had no other choice but to reassemble the superhero team of the Squadron, for the sake of defending the world and preventing the planet from the most dangerous of threats, no single hero could ever handle in defeating.

Finding themselves in another Earth, the Squadron were obligated to team up with the Avengers, that very Earth's mightiest defenders. On a side note, this would also be the first time this reality had truly visited another reality despite already acknowledging its existence, along with the proper introduction of the multiverse to the heroes and villains of the reality that they've visited. During the interdimensional alliance, Jeffrey's attempt to get back to their home universe using his speed has only led to them encountering heroes who harnesses similar, if not the same powers as his, personally meeting fellow speedsters such as the false mutant Quicksilver, the young Speed, and the on-and-off hero Speed Demon.

Together, they started to feel the very universal energy within which grants them supersonic speed, driving them to discover the infinitely beyond origin of their source of powers, the Power Primordial, by using his potential and capabilities whilst dealing with the multiversal threat that was Null. By the climactic finale of their journey on what would be dubbed as Prime Earth, the Blur, the other speedsters, the Squadron, S.H.I.E.L.D., and the Avengers took their stand to confront and exile Null out of to prevent it from consuming other universes, including their own. In the end, the heroes of both worlds were able to banish the Living Darkness into the unknown abyss of the multiverse, thanks to their greatest, dangerous living weapon: the Void, an "inner demon" which possesses the psychologically-conflicted veteran hero Robert Reynolds.

Speed Physiology: Blur gained the ability to run at extremely high speeds granted by the Powerful Primordial, a mysterious multidimensional energy force, the very same energy force that granted Earth-61615's Quicksilver and Speed Demon to run at higher speeds than an ordinary human or a superhuman, "supersonic speed."

Retrieved from "https://marvelcomicsfanon.fandom.com/wiki/Jeffrey_Walters_(Earth-61712)?oldid=281594"
Community content is available under CC-BY-SA unless otherwise noted.