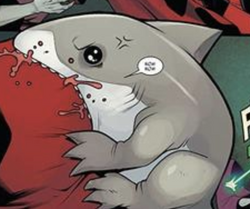 When the Advanced Idea Mechanics began harnessing energy from the Dark Dimension, the Scientist Supreme was able to engineer a race of land sharks. He intended to use them to storm a S.H.I.E.L.D. base off the coast of Cape Cod, but they were met with interference from the Masters of the Mystic Arts.

The larger and deadlier land sharks were wiped out, but one land shark was much smaller and sweeter than the others, although he still packed a bit of a bite, as discovered by Elsa Bloodstone, who agreed to take care of the shark.

However, it soon became clear that although he was feisty, he was not suited to accompany her on her missions. The Scarlet Witch then offered him to her sons, Billy and Tommy, who each seemed hesitant. Their teammate, Cassie, on the other hand, was overjoyed and excitedly accepted ownership of the shark.

She named him Jeff and he moved into her home, which did not particularly surprise her mother, as Cassie had a history of bringing home peculiar animals, including, but not limited to, giant ants.

Retrieved from "https://marvelcomicsfanon.fandom.com/wiki/Jeffrey_Lang_(Earth-101)?oldid=250051"
Community content is available under CC-BY-SA unless otherwise noted.