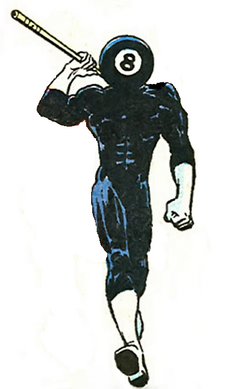 One ball-headed loser with a number for a face in the side pocket!

Little is known about the early life of Jeff Hagees. What is known is that he dropped out of both high school and community college, but still managed to eventually get an engineering degree. And while Jeff was a mediocre engineer, he was a terrific pool player. He spent all his free time playing pool, to the point where he entered a few tournaments and worked his way up to the professional level. His employers were concerned that he procrastinated at his job for the sake of pool, so he was swiftly fired.

All that would change when he was first held at knifepoint by Leslie Anne Shappe. She was a murderer who carved infinity symbols into her victims as a sign that nothing ever ends. But her insignia was misunderstood, and she was instead dubbed "the Crazy Eight Killer." She wanted Hagees to create equipment so that she could kill those responsible for mislabeling her as Crazy Eight, and then continue her regular murders with the infinity theme. Hagees, not wanting to die, set to work creating advanced pool equipment using his engineering experience. However, when the time came to pass off the equipment, Hagees was again held at knifepoint. Shappe had changed her mind, and now wanted Hagees himself to don the equipment and draw attention away from her as the 8-Ball. Begrudgingly, Hagees accepted, as he still needed to make a living, and while he was good at pool, he was not good at gambling, and had amassed significant debts. This led to Jeff's debut as the 8-Ball. More coming soon!

Currently none. Jeffrey Hagees is an ordinary human.

Human Weakness: Jeff Hagees is an ordinary human, and as such, bears all weaknesses that any human does.

Retrieved from "https://marvelcomicsfanon.fandom.com/wiki/Jeffrey_Hagees_(Earth-166)?oldid=223663"
Community content is available under CC-BY-SA unless otherwise noted.