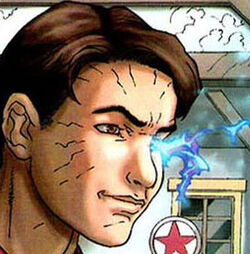 Jeb Guthrie was a mutant and a member of the Guthrie family, like Samuel (Cannonball), Paige (Husk), Melody (Aero) and Jay (Icarus). Jeb's father Thomas died when Jeb was very young. He had developed what is commonly called 'black lung' due to working in the local coal mines.

Jeb didn't join any of the X-teams but had to deal with fallout from their problems.

Plasma Optical Blasts: Jeb can channel plasma electric energies and use them in a variety of ways. He can fire stored energy from his eyes in a forceful manner or to a lesser degree, simply channel the electricity through his eyes to electrocute any would-be attackers. It is unknown how he absorbs said power, if he has to come in contact with it directly or even if his body itself produces it. It is also unknown the extent to which he can channel this power or how much he can hold or for how long.

Retrieved from "https://marvelcomicsfanon.fandom.com/wiki/Jebediah_Guthrie_(Earth-1010)?oldid=256272"
Community content is available under CC-BY-SA unless otherwise noted.