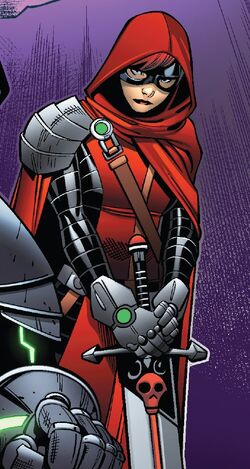 If it be my destiny, I will take you into battle.

Jeannine Sauvage's father developed a high-tech sword called La Fleur de Mal, named after an ancient sword with mystical properties. He encoded it to match Jeannine's genetic code, making her the only person "worthy" of wielding it.

After returning home for the first time since being deployed on combat missions, Jeannine discovered the sword in the attic, and discovered the powers it possessed. She decided to live up to everything her father expected of her and use the sword to fight crime.

She eventually gained the attention of S.H.I.E.L.D., who recruited her to join their British team of heroes, Excalibur. She was given the name of Guillotine, and she agreed to go public with her identity in order to gain public approval, being a known war hero.

Retrieved from "https://marvelcomicsfanon.fandom.com/wiki/Jeannine_Sauvage_(Earth-101)?oldid=250582"
Community content is available under CC-BY-SA unless otherwise noted.