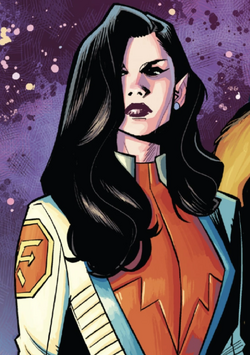 You dare speak to me like that? You are such a disappointment, little brother.

Jeanne-Marie and her twin brother, Jean-Paul, were separated at a young age. Jeanne-Marie ended up being recruited by Apocalypse and raised in the training center, where she was trained by Mister Sinister.

She became strong and ruthless, harnessing her powers of lightspeed to further Apocalypse's agenda of mutant supremacy. Her mission eventually brought her face to face with her brother for the first time in years, who had gone on to become Captain Canada, one of the leaders of the Avengers. The two of them battled, but each found themselves incapable of killing the other.

Aurora was later part of a group of soldiers sent to raid Department H. In the ensuing battle, she found herself engaged in battle against her brother once more, but still couldn't kill him. She managed to overpower him and was on the brink of forcing herself to finish things, only to be stabbed in the back and killed by Wolverine.

Retrieved from "https://marvelcomicsfanon.fandom.com/wiki/Jeanne-Marie_Beaubier_(Earth-9999)?oldid=246098"
Community content is available under CC-BY-SA unless otherwise noted.