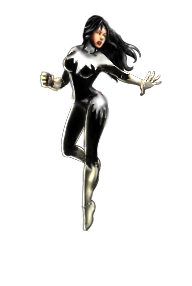 Born in Canada, Jeanne-Marie and her twin brother, Jean-Paul, were separated in infancy after their parents died in a car accident which caused them both to grow up without knowledge of the other. She was raised in a hyper-religious school in Quebec. Extremely nervous and introverted to the point of suicide, she soon discovered her mutant powers of flight, believing them to be a divine gift due to her strict religious upbringing. Telling her story, Jeanne-Marie was severely and inhumanly disciplined by her teachers for "blasphemy". This incident began the Multiple Personality Disorder she would suffer for the rest of her life - her primary personality of a prim and proper, repressed woman, and a secondary personality of an uninhibited extrovert. As with most disorders of this type she could not remember what she did when reverting back to Jeanne-Marie. Because her problem wasn't understood or really looked at it caused her to be punished even more severely. Soon she buried the personality as well as the knowledge of her powers deep within her mind. At one time she even contemplated jumping off the roof of the school to see if her powers would save her. Instead she finished school and began teaching. Both personalities strongly disliked the other, and would switch in fear, despair, or severe stress.

Beaubier was remanded to a mental institution. Months later she was freed from the asylum by Wild Child on behalf of the Weapon X program which (under the auspices of the mysterious Director) hoped to use the program's mutants for the benefit of humankind, even if that meant performing deadly missions and interning mutant captives. Beaubier was experimented on to relieve her mental condition and she joined the Weapon X program, although she rejected Wild Child due to his new freakish appearance.

Leaving Weapon X soon afterwards, Beaubier's uninhibited personality exerted herself to revel in joy. She was attacked by muggers, however, and used her powers to defend herself. She used her powers to defend herself against one of them when Wolverine, who was nearby at the time, noticed the commotion and stopped the second mugger. He told Jeanne-Marie that she should seek James Hudson in Ottawa. Noting her strong resemblance to Jean-Paul Beaubier, Hudson contacted him when she arrived. The two reunited and joined Alpha Flight as Aurora and Northstar.

Gestalt Photokinesis: Originally she could only generate light when in physical contact with her twin brother Northstar. Should she link hands with Northstar, they could generate a light equivalent to a lighthouse beacon (one million foot candles) by each sibling’s varying the rate of acceleration of his or her own molecules out of phase with those of the other's.

Photokinesis: She can generate from her body a bright white light equivalent at maximum intensity to half million-foot candles. She does so by varying the rate of acceleration of the molecules of her body out of phase with one another, thereby generating a cascade of photonic discharges.

Superhuman Speed: She possesses the ability to propel her body at superhuman speed, becoming a living projectile. Through an act of concentration, Aurora can channel a portion of the kinetic energy of the atomic motion in her body’s molecules in a single direction. This can accelerate her body in a velocity in direct proportions to the amount of kinetic energy she has tapped. It was once theoretically possible for her to reach 99% of the speed of light (186, 272 miles per second in a vacuum), although she never traveled at anywhere near that speed since if she did, she would wreak great damage upon herself and her environment. Aurora can also move a portion of her body at superhuman speed at a time. Dr. Langkowski's actions in molecularly restructuring Aurora's body greatly reduced the potential limits of her speed. She now can move at speeds roughly up to the speed of sound (about 770 miles per hour at sea level). This reduction has made little difference in the use of her powers over short distances, since she can still move faster than the human eye can follow.

True, I can fly at Mach-50 without effort and emit regenerative energy when I touch my brother, but mostly that's behind me.

Equipment: Aurora's costume is specially made so it does not tear while she uses her powers.
Transportation: Alpha Flight Omnijet.
Weapons: None known.

Retrieved from "https://marvelcomicsfanon.fandom.com/wiki/Jeanne-Marie_Beaubier_(Earth-1010)?oldid=114581"
Community content is available under CC-BY-SA unless otherwise noted.