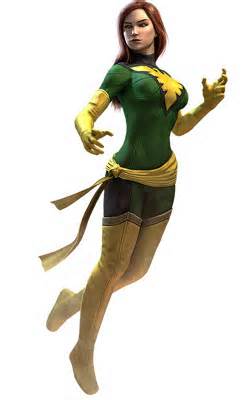 Little is known about Jean Grey's life before being kidnapped by the Masters of Evil. It can be assumed to be similar to her mainstream counterpart.

Jean, along with Nightcrawler, was kidnapped by Dr. Doom and his Masters of Evil following his attack on S.H.I.E.L.D.'s Omega Base. While he used Nightcrawler to teleport into Mephisto's Realm to acquire the Twilight Sword, Jean was to be used to help destroy the Ultimate Alliance. Doom had Baron Mordo use his magic to redirect Doctor Strange's Orb of Teleportation to send the heroes to Murderworld rather than Doom's castle. There Arcade brainwashed Jean and used her to attack the heroes with hopes of unleashing the Dark Phoenix.

The heroes found Jean in her Dark Phoenix state, angrily claiming how everyone tried to suppress her power and proceeding to attack them. Distraught by her temporary defeat, she blasted the chamber in which she was fought, revealing that the heroes had actually wound up in Murderworld. She was later fought in the Big Top at Arcade's twisted theme park. Upon being beaten, he sucked her into a Pitfall! arcade machine, which the heroes had to beat to set her free. By doing so, they managed to bring Jean back to her usual self.

Returning with the heroes to Sanctum Sanctorum, she assisted Professor X in scanning Nightcrawler's whereabouts, eventually finding him in Mephisto's Realm, to which he teleported himself through the use of the Mutant Amplifier. She traveled there along with the heroes to try and keep him alive, since Xavier's telepathic link with Kurt was weakened by the realm's nature. But, by doing so, she fell prey to Blackheart, who abducted her and placed her in a cage high above the Infinity Vortex, as he had done to Nightcrawler before.

Upon defeating Blackheart, the heroes had to choose between saving Jean or Nightcrawler, in one last cruel ploy devised by Mephisto's son. Unable to save them both at the same time, the heroes are torn between two of their most loyal allies. Ultimately, it was Nightcrawler who fell into the Vortex.

Later Nightcrawler was resurrected as a shadow to fight the Alliance under Mephisto's control, and sacrificed himself to defeat him. Jean then will be tormented with guilt of not being able to save her friend.

In the aftermath of Lucia von Bardas' attack on New York, Jean helped with the clean-up. She used her telekinetic powers to incapacitate some of the remaining Latverian soldiers, as well as battling and defeating the Grey Gargoyle.

She was one of the many heroes to fight during the Civil War with the Anti-Reg heroes and subsequent war with the Fold.

As the Phoenix Force Avatar

Phoenix excels in astral combat. She maintained a psychic link to Cyclops for a number of years. She possessed the memories of the Phoenix duplicate of her as well as those of Madelyne Pryor-Summers, her clone, and is thus an expert pilot. Jean has shown some proficiency in hand-to-hand, non-psionic combat; the extent of this is unknown as she prefers to utilize her telekinesis and telepathy during battle. She has a college education from Metro College.

Retrieved from "https://marvelcomicsfanon.fandom.com/wiki/Jean_grey_(Earth-555326)?oldid=164382"
Community content is available under CC-BY-SA unless otherwise noted.