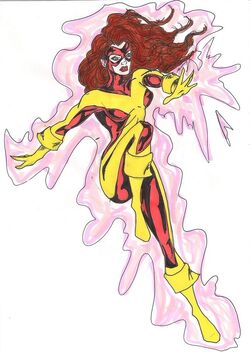 The original Jean Grey was mutant with the powers of telepathy and telekinesis. She had blocked her telepathy as a child, and focused mostly on developing her telekinesis. She was a founding X-Man, but she was killed in battle on one of their first missions. While Magneto cleared the scene, the Professor telepathically found one of her hairs. He kept it in a baggie labeled "Jean Grey- Marvel Girl."

Soon after, a clone of Jean Grey was made, presumably from this hair. The clone was given a striking red and gold uniform. She also had her telepathy blocked by the Professor, so she would not find out anything. She also had the memories of the original Jean implanted. The clone, along with a clone of Cyclops was made, and presented to the other 3 members of X-Factor. There was an outrage at their presence, which surprised her. But soon after, she was able to break her mental blocks and access her telepathy. She read the minds of her friends and found out the truth. She also shared this with Cyclops, who was outraged. They remained with X-Factor, and later on, she married the clone of Cyclops.

Telepathy: Jean has the power of telepathy, allowing her to project an astral form, read minds, and alter memories.

Telekinesis: Jean's primary power is the ability to lift objects with her mind, also allowing her to create force fields, constructs, and levitate.

Clone Physiology: Due to being a clone, Jean has slightly greater-than-average strength, stamina, durability, and speed.

Retrieved from "https://marvelcomicsfanon.fandom.com/wiki/Jean_Grey_(X-Factor)_(Earth-5)?oldid=244903"
Community content is available under CC-BY-SA unless otherwise noted.