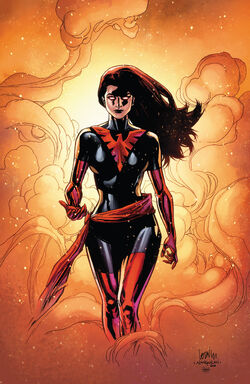 I don't have to read your mind to know you think this is hopeless. Part of me agrees with you, but if I don't have this fight... this cause... what do I have?

Jean Grey is the most powerful telepath on Earth, rivaled only by Apocalypse. She was recruited as a teenager by Magneto into the X-Men to fight against Apocalypse's rule.

After serving under her mentor for years, she was devastated when he was taken by Ultron and presumed deceased. Jean took up the mantle of leader of the X-Men.

Jean would later be approached telepathically the the cosmic entity the Phoenix Force, which had supposedly been tamed by Apocalypse. Growing weary of imprisonment, the Phoenix lends out a portion of its power to Jean to assist her in the fight against Apocalypse and Ultron.

Retrieved from "https://marvelcomicsfanon.fandom.com/wiki/Jean_Grey_(Earth-9999)?oldid=245219"
Community content is available under CC-BY-SA unless otherwise noted.