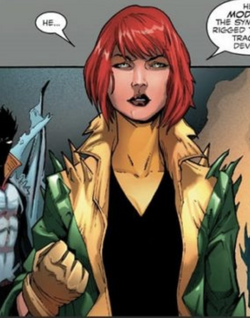 Earth-667516
Base Of Operations
The Outside
Characteristics
Gender

Let's see what you've got hiding in that pretty little head of yours...

Jean Grey's psychic abilities manifested at a young age when she accidentally caused a car crash that killed both of her parents. She was then adopted by fellow telepath, Charles Xavier, who put psychic blocks in her mind to protect her. As she grew older, her powers grew stronger, forcing Xavier to continue meddling within her mind. By the time Xavier had formed the X-Men, Jean had subconsciously broken through the barriers, but in the process shattered her own mind. Losing her grasp on reality, Jean developed an alternate personality she dubbed "The Phoenix", and murdered Professor Xavier. Turning on the X-Men, she ended up killing all of them as well, including her boyfriend, Cyclops and best friend Storm.

Jean was eventually recruited into the Renegades by The Outsider, under the promise that if she returned to her home world, Jean's dormant personality would regain control and wipe the Phoenix out of existence. Not willing to let that happen, Phoenix agrees to become a Renegade. After serving with them for some time, Phoenix eventually becomes the leader of the team following Luke Cage's departure.

Eventually, the Outsider pitted the Renegades and the Outsiders against each other to consolidate the teams. Jean fought hard and became engaged in battle with her daughter from an alternate reality, Rachel, who gains the upper hand and shuts down Phoenix's mind completely, effectively killing her.

Retrieved from "https://marvelcomicsfanon.fandom.com/wiki/Jean_Grey_(Earth-667516)?oldid=244540"
Community content is available under CC-BY-SA unless otherwise noted.