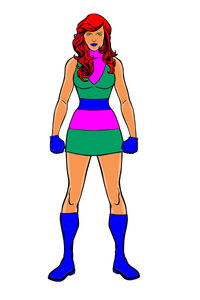 Jean Grey was born and grew up in Naples, Florida, and lived in a nice and closed-off community called The Strand, where she had a boyfriend named Jack when she was 13. One day she was hanging out with Jack, who had also been her best friend since birth, was struck by a speeding car, put into a coma. A week later she was visiting him in the hospital, when he died. However, before his death, Jean heard all his thoughts, and felt what he had felt every moment of his life, up to the point of his life when he was hit by the car. Jean fainted as soon as she felt this. Awaking 3 days later, she found a man named Charles Xavier by her bed. He explained that she was a mutant, and explained about his school, Xavier Institute for Higher Learning, (later named Xavier Institute for Gifted Youngsters) and joined his new team, the X-Men, as Phoenix, wearing a blue costume bearing a bird insignia. She struck up a relationship with fellow X-Man Cyclops, a.k.a. Scott Summers, but after her third mission, she flew of into the sun, engulfed in flames, calling herself Phoenix. 3 years later, after the X-Men had welcomed several new members, she returned to Earth, taking the alias Marvel Girl, and married Cyclops. Though she has so far shown no more signs of the Phoenix, she is secretly under constant surveillance of the team and their field leader, also her husband, Cyclops.

Retrieved from "https://marvelcomicsfanon.fandom.com/wiki/Jean_Grey_(Earth-2011)?oldid=260890"
Community content is available under CC-BY-SA unless otherwise noted.