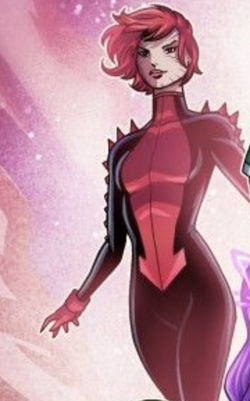 Earth-16045
Base Of Operations
The Nexus
Characteristics
Gender

I've always theorized about the multiverse, how one small decision can change everything. But I never imagined I'd see so many versions of myself in such turmoil... and me, unable to do anything to help.

When Jean Grey's mutant powers manifested at the age of 15, she was recruited by Charles Xavier to join his ever-expanding society of mutants to live on Asteroid M, free of human interference and prejudice. Jean grew up on Asteroid M, learning how to hone her telekinetic powers, eventually even developing telepathic and psionic abilities as well.

Eventually, Xavier decided to introduce a squadron of mutants to humanity in order to gain their trust as heroes, only to be met with immediate pushback from the humans. Retreating back to Asteroid M, Jean discovered that Charles had reached out to the alien empire known as the Shi'ar, who agreed to form an alliance with him and expose a virus to humanity that would result in only the survival of mutants.

Jean was horrified by this turn of events, and was able to rally some of her fellow mutants, such as Archangel, Cyclops, Wolverine, Storm, Beast, Magneto, Diamond Shard, Cannonball, Colossus, Rogue, and Bishop, in order to stage a rebellion against Xavier. He ended up meeting his end at the hands of Wolverine, but Jean's make-shift team of mutants proved unable to save humanity from the virus.

With mutantkind the only surviving species on Earth, Jean worked together with some of her fellow great minds, like Magneto and Beast, to form a mutant council that would help usher the survivors into a new era of peace. Part of that journey included the mutants forming an Inter-Galactic Guard to help protect the Earth from other coming cosmic threats, even managing to fight off the likes of Thanos and Galactus. Eventually, mutantkind found themselves in an era of peace, allowing for Jean to finally settle down with the Archangel and have a daughter, whom they named Diana.

Unfortunately, Angel was killed by the time traveler Hyperstorm when Diana was only 6-years-old. This resulted in Jean dedicating her life to maintaining the Inter-Galactic Guard, even opting to travel out into space to eliminate any possible threats in advance, as well as form alliances with peaceful civilizations. This resulted in Diana growing to resent her mother, instead feeling closer to her godparents, Cyclops and Rogue.

The Scarlet Witch never got a chance to make amends with her daughter, as not long after the Guard returned to Earth, they were besieged by the Phalanx. After witnessing some of her closest friends and allies, including Magneto and Storm, perish, the Scarlet Witch herself came face to face with her destiny. She tried to fight off the energy blast, but was quickly consumed by it. However, rather than dying, Jean was plucked out of her reality by the Silver Sentry, who had recruited her onto the reality hopping squad named Team X.

After awakening in the Nexus, a place beyond the multiverse, Jean was brought face to face with alternate versions of the people she once knew in her own timeline, including Charles Xavier, Cyclops, Beast, Iceman, and even Angel. Before the Silver Sentry even got a chance to explain things to them, Jean scanned each of their minds, and was nearly overwhelmed by what she saw.

Jean was reluctant, but after accepting that everyone in her home world believed her to be dead, she agreed to join the Team and follow Angel's lead. She tried to remain distant from him, and found herself coming to confide in the 18-year-old version of Cyclops, which she found surprising, due to her somewhat cold relationship she had with her own version.

After going on several missions with the Team, Scarlet Witch was eventually the last original member to remain on the team. Following Angel's death, Jean was equipped with the Tallus and promoted to team leader, which she tried not to let go to her head, as she attempted not to get close to in order to keep her focus on the mission. But things changed when Team X found themselves in a reality in which Hydra used mutants as weapons to conquer the entire world.

Team X's mission was to eliminate the Head of Hydra; a depowered Jean Grey. After fighting through armies of corrupted mutants, Jean was able to eliminate her alternate self, and the Team was dismissed by the Silver Sentry. However, he claimed that Jean had "completed her mission", allowing for a vacancy on the Team to be filled. They were then swept away back into the multiverse, and Jean believed she would be returned to her home reality, only to discover she remained in that of the Hydra Empire. With the tide having turned against Hydra, Jean was mistaken for her alternate self and quickly became a public enemy, forcing her to go on the run.

Attempting to create a new identity for herself in this reality, she began doing research into the alternate versions of her friends and family. This Angel had been killed by Hydra in the early days, as well as Magneto and Professor X, while some of her closest friends including Wolverine, Storm, Colossus, and Beast having joined Hydra. However, she soon came to discover that this reality's version of Scott Summers was a freedom fighter, leading the Morlocks to protect mutants who were yet to be captured by Hydra. After they met, Jean opened his mind to him and they found themselves falling in love.

Together, Scott and Jean began to lead the Morlocks into a brighter future, forming an alliance with the human rebellion against Hydra. However, after Hydra was finally defeated for good, Jean discovered they had a number of mutants in custody who refused to submit to their will, one such mutant being Rogue, Cyclops's fiance. Partially amused by the repetitive nature of Cyclops and Rogue's relationship, she decided to step out of the way and allow them to live out the rest of their lives together.

Not long after deciding to wander the galaxy of this new reality, she was plucked out of the multiverse once more. She discovered that Team X had gone through a lot during her absence, having gone through multiple roster changes, rising up against the Silver Sentry, and taking control of the Nexus. After being brought back to the Team, Jean discovered that Cyclops had rejoined as well, and now saw him in a different light due to her experiences on Hydra world. Having been humbled as well, she agreed to delegate leadership of the team from behind the scenes to Mirage and Rocket, while she would assume command of the field teams. She even eventually gathered up the courage to use the Nexus to travel back to her home reality in order to make amends with her daughter.

Retrieved from "https://marvelcomicsfanon.fandom.com/wiki/Jean_Grey_(Earth-16045)?oldid=251238"
Community content is available under CC-BY-SA unless otherwise noted.