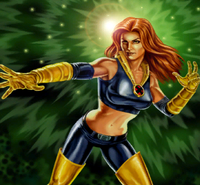 First appearance
The Past Returns

Since childhood, Jean Grey had mutant powers and abilities that were beyond all known limitations. Fearing that Jean could not control her vast psychic powers, Charles Xavier put psychic blocks around her subconscious mind to keep Jean's abilities in check. As a result while growing up, Jean developed a dual personality - one being her usual self and the other her vastly strong, powerful, and uninhibited side that called itself the Phoenix Force, which emerged when she was angry or enraged. Jean Grey still managed to develop strong telepathic, empathic, and telekinetic abilities in spite of the blocks.

Jean Grey became an X-Man, and served as a doctor at Xavier's School for Gifted Youngsters. She was in a long-term relationship with Cyclops.

"Jean Grey is the only Class 5 mutant I've ever encountered; her potential practically limitless. Her mutation is seated in the unconscious part of her mind and therein lay the danger" Charles Xavier

Jean Grey was a Class Five mutant with immensely strong, powerful and potentially limitless telepathic, empathic, and telekinetic abilities. At the peak of her potential, Erik Lehnsherr referred to her as "the next stage of (human) evolution". Early in her life her vast psychic powers were suppressed by Charles Xavier's mental "blocks" which restricted her abilities to limited telekinesis and telepathy.

Telepathy: Jean can read minds of others; an ability she apparently used proficiently as a child. Her telepathic abilities were initially low-level on account of Xavier's psychic blocks but, after the Liberty Island Incident, her telepathy began increasing exponentially. Yet it should be noted that, in spite of her then constrained powers, she was able to successfully use Cerebro to pinpoint Magneto's location. Whilst her telepathic sensitivity had increased, her control was limited. However she demonstrated more refined control over her increased telepathy by sensing the presence of Cyclops.

Telekinesis: Could move objects with her mind, levitate them, control their molecular structure, disintegrate them and generate heat and light. From childhood Jean demonstrated unparalleled telekinetic ability by effortlessly levitating a lawnmower, a jet of water and several cars simultaneously. As an adult, as was initially the case with her telepathy, Jean's telekinesis was limited to the levitation or movement of relatively small objects which still required concentration. After the events of Liberty Island, Jean demonstrated far greater command over her increased telekinesis as well as highly advanced telekinetic feats such as deflecting a missile as well as dispersing the energy of Cyclops' optic blasts in a destructive wave.

Normal human female who engages in moderate regular exercise. She can telekinetically lift a limitless amount of weight.

Initially Jean's limited power made her vulnerable to a variety of skilled and/or powerful opponents.

Retrieved from "https://marvelcomicsfanon.fandom.com/wiki/Jean_Grey_(Earth-1210)?oldid=255899"
Community content is available under CC-BY-SA unless otherwise noted.