Marvel Fanon
Register
Don't have an account?
Sign In
in: Characters, Templated Articles, No Dual Identity,
and 33 more 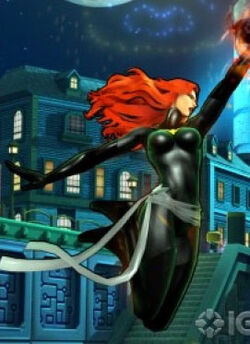 Hey, I'm just a songwriter, and songwriters always have little voices in their heads helping them to inspire and write.

Jean Grey is a girl whose only passion is music. Since her teens, she started a punk-rock band with her school friends called "Phoenix Force". All of her friends consider her a "Prodigal Songwriter", having written all of the songs of her band, claiming that the inspiration comes by itself through the little voices in her head that point her to find the right lyrics for her music

During her time with her band, she landed a major opportunity for her and her bandmates to perform for a major record company, even writing a special song for the occasion which she dubbed "I Know What You're Thinking", but on the day of the gig, she started to get suspicious on the record label executive, who didn't stop staring at her. Once the band started playing, many voices were sounding on her head, but the main one came from the record label executive who was having lustful thoughts about her, making her feel suddenly uncomfortable, but she still managed to pull a great performance, enough to convince the executive to agree to sign them, only if he talks privately with Jean first

Jean agreed to meet the record executive, who introduced himself as Jason Wyngarde, converses with Jean that he's actually more interested into her than her bandmates, trying to manipulate her into signing a solo act and dump "Phoenix Force", but she refused to leave her band. It's there where she once again starts hearing Jason's voice in her head, but see he's not moving his mouth, discovering that still never intended to sign her up, only interested in her looks as "just another girl to sleep with". Once she sees him making a pass at her, she grabs a bottle of whiskey and smashes it in his head, then pushing him away making him fly across the room. Jean leaves the room angry and shocked, even ignoring her friends but still hearing those voices in her head, which she doesn't realize means that her mutant powers have emerged

Second Face-Off and Joining the X-Men

Two weeks after the incident, Jean returned home where things went back almost to normal, since she managed to control the voices in her head for the moment, but then she discovered the news that her bandmates signed with Wyngarde and to top of that, they hired a new lead singer to replace her. Angry about the apparent betrayal, she decided to confront her friends but they looked rather different to how she knew them, even scaring her by telling her that she should've allowed Wyngarde to take her so they can be successful. However this was revealed to be a trap set by Wyngarde and his daughter Megan who reveals that he has mental powers, manipulating her bandmates and reveals to her that she also has that kind of power, but even greater and that she should still join him. Jean refuses and tries to convince her friends to snap back, but there's no response from them, even going as far as to hold her out. Refusing to unleash her powers and hurt her friends, she stays shocked, fearing what Wyngarde might do to her, sensing his lewd thoughts and desires but when he gets too close to her, an energy bean appears blasting Wyngarde away from Jean, making the other people stop and search for the perpetrator, who is revealed to be Scott Summers, now going by the name of Cyclops, who came along Professor X to help Jean with this trouble. Scott managed to subdue the guys present while Xavier cleared their minds from Wyngarde's influence, but Megan allowed her father to escape. Jean thanks Scott for saving her and helping her friends but asks how he did that. Xavier replies that they came to visit her, revealing her powers as a mutant, just as Scott and himself. Scott proposes that she join them in their team and after some convincing, she accepts.

Telepathy: Jean is able to read thoughts, project and broadcast her own thoughts, as well as affect the minds of humans and animals with higher order intelligence (such as dolphins, ravens or dogs). She has demonstrated the following specialized uses:

Telepathic Defense: She can manifest her telepathy in a number of defensive ways.

Telepathic Illusions: She can create realistic telepathic illusions and cause people to experience events which are not actually occurring.

Telepathic Manipulation: She can manipulate other people's minds easily, achieving a variety of effects.

Telekinesis: Projection of psychokinetic energy enables her to levitate objects, propel or manipulate them however she wishes, lift herself and move through the air to simulate flight, stimulate individual molecules to create heat, generate concussive force as blasts or bursts, and create protective shields. She is able to manipulate matter and energy on a sub-atomic scale using her telekinesis. She can even change her Phoenix clothes into a set of street clothes, and lift multiple heavy objects at once without having any difficulties.