White Phoenix of the Crown 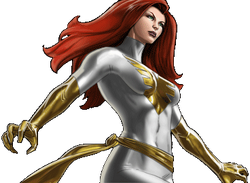 White Phoenix of the Crown
Aliases

Since childhood, Jean Grey had mutant powers and abilities that were beyond all known limitations. Fearing that Jean could not control her vast psychic powers, Charles Xavier put psychic blocks around her subconscious mind to keep Jean's abilities in check. As a result while growing up, Jean developed a dual personality - one being her usual self and the other her vastly strong, powerful, and uninhibited side that called itself the Phoenix Force, which emerged when she was angry or enraged. Jean Grey still managed to develop strong telepathic, empathic, and telekinetic abilities in spite of the blocks.

Jean Grey became an X-Man, and served as a doctor at Xavier's School for Gifted Youngsters. She was in a long-term relationship with Cyclops.

By birth, Jean is among the most powerful telepaths, telekinetics and psions. She is also one with the Phoenix Force, and while acting as its avatar she is one of the most powerful Abstract Entities in the Earth-1010 universe. She also was considered to be a "Mutant Alpha-Psi", an Alpha Level Telepath, an Alpha-Level Mutant and Psionic of Highest Order. As Dark Phoenix, she has been stated to be a global threat and to manifest cosmic-level powers.

While accessing the Phoenix Force, Jean's empathy, telepathy, and telekinesis are greatly magnified and heightened to an incredible degree. The Phoenix Force also allows her to travel unaided through the vacuum of space, cross interstellar distances faster than the speed of light, and to manifest flames while using her powers, often in the shape of a fiery raptor.

Empathy: On many occasions, Jean has shown to have incredibly strong empathic powers that enable her to control, manipulate and alter the feelings, sensations, and emotions of others. It is because of her empathic abilities that the almighty Phoenix Force had chosen her as its rightful human host. In other versions, she had not been shown possessing any types of empathic abilities except for telekinesis and telepathy.

Telepathy: Jean is able to read thoughts, project and broadcast her own thoughts, as well as affect the minds of humans and animals with higher order intelligence (such as dolphins, ravens or dogs). The range at which she can perform these feats is greatly increased while she is accessing the Phoenix Force. After her absorption of Psylocke's specialized telepathy, Jean's own telepathic skill and power was increased to a level at which she could create psionic firebirds capable of inflicting mental and physical damage. She has demonstrated the following specialized uses:

Telekinesis: Projection of psychokinetic energy enables her to levitate objects, propel or manipulate them however she wishes, lift herself and move through the air to simulate flight, stimulate individual molecules to create heat, generate concussive force as blasts or bursts, and create protective shields. While she has access to the Phoenix Force, she is able to manipulate matter and energy on a sub-atomic scale using her telekinesis. She can even change her Phoenix clothes into a set of street clothes, and lift multiple heavy objects at once without having any difficulties.

As the Phoenix Force Avatar

As the favored and true avatar of the powerful Phoenix Force, Jean may greatly increase her powers by tapping into the life energies of those yet unborn. The Phoenix Force also allows its avatars to manifest additional powers, especially in terms of Jean as its "host, house, and self". Jean Grey is the strongest and complete host of Phoenix Force and as such, she is even capable of forcibly ripping it out of another host and forcing its status upon herself.

Interstellar Travel: A Phoenix Force avatar can fly unaided through the vacuum of space, and can travel interstellar distances faster than the speed of light

Cosmic Pyrokinesis: Jean, while acting as a Phoenix Force avatar, can create 'cosmic' fire under any conditions- even the impossible ones such as in the vacuum of space or underwater. This fire does not require oxygen to burn, and burns so intensely that matter is consumed without by-products such as ash. Jean has perfect control over this fire, and it only consumes what she wills. Typically it manifests as a raptor or part of a raptor such as a claw or wings. It is unclear whether this fire is an extension of her powerful telekinesis or a more general property of the Phoenix Force, or it is possible that she can create her very powerful 'cosmic' fire by the combination of both her extended telekinesis power and Phoenix Force as the result of her status as the one true Phoenix. It is certainly true that the cosmic fire is literal punctuation to the Phoenix's purpose to 'burn away what doesn't work' and 'burn through lies'.

Cosmic Teleportation: She can teleport her and others across vast distances such as to another planet or galaxy, across the vast vacuum of space itself, or even an entirely new timeline all-together.

Concussive Force Blasts: She can use the 'Phoenix energy' to manipulate and project multiple forms of energy, and use it to project blasts and beams of immense concussive force powerful enough to destroy whole planetary bodies.

Resurrection: The Phoenix Force can resurrect others after they have died into pure living flesh, bone, and blood. It is unknown if factors such as time since death have an effect on the ability to successfully resurrect a person, nor is it clear how the Phoenix calls back the soul of a person to their body.

Energy Absorption: She can directly absorb, manipulate, generate, and fully control any type of energy such as Cyclops' ruby-red-colored optic blasts or the entire energy of a star, black hole, or even a whole galaxy. Jean, as the "One-True Phoenix", was shown to be able to activate and deactivate the mutations of other's with just the use of her psychic abilities.

Life-Force Control: As Jean is one with the Phoenix Force, she can fully control and manipulate life and death itself, as such, it can take the "life energy" from something, rendering it "dead" or vice versa.

Immortality: Jean and the Phoenix Force are one-and-the-same entity at some fundamental level and as such Jean can never truly die and as a Phoenix Force avatar she does not age. The Phoenix Force can also restore Jean's body to life, although there appears to be some unknown limitation to how quickly it can successfully accomplish this following her death.

Temporal Manipulation: While acting as the Phoenix Force avatar can manipulate the past, present and future across large temporal distances and with a profound knowledge of the causal effect her actions will have and see through the time. It may be the case that time as a concept doesn't apply to the White Hot Room.

Existence Mastery: Since Jean Grey is Phoenix entirely she is able to possesses total control over the entirety of existence. She can warp reality, bring anything into existence, freely manipulate all existing things and return them to nothingness when their purpose is extinguished.

Normal human female who engages in moderate regular exercise. She can telekinetically lift a limitless amount of weight.

Initially Jean's limited power made her vulnerable to a variety of skilled and/or powerful opponents.

Equipment: Jean's X-Men outfit is made of leather.
Transportation: X-Jet
Weapons: None

Retrieved from "https://marvelcomicsfanon.fandom.com/wiki/Jean_Grey_(Earth-1010)?oldid=255887"
Community content is available under CC-BY-SA unless otherwise noted.