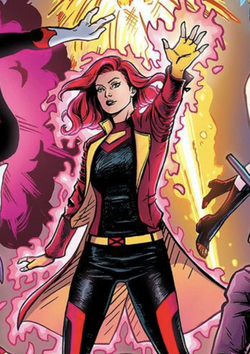 Not much scares me in this world. But if I'm being honest... my power terrifies me a little more every day. I'm worried that it'll overtake me... and I won't be able to control it.

Jean Grey was always a very social and upbeat child. She was the apple of her parents' eye. Unfortunately, her mutant abilities developed at a much earlier age than most others. When she was 8-years-old and riding in the car with her parents in heavy traffic, she began hearing other people's thoughts. However, she didn't know that's what it was. She simply thought she was going insane, and as she screamed and tried to expel the voices from her mind, her telekinetic powers took effect and forced the steering wheel to the side, crashing into another car, resulting in a massive car crash that in total claimed 12 lives, including her father.

Her mother, however, went into a coma and was quickly declared braindead. This left Jean an orphan with no control over her abilities. However, she was taken in by a man named Charles Xavier, who helped her come to realize that she was a telepath, just like him. However, he could already tell that she was much more powerful than him. Seeing no other feasible option, Charles placed psychic barriers inside Jean's mind to keep her powers stable, and just for good measure, erased the memory of her causing the car crash.

For the next few years, Jean was raised in Xavier's Westchester mansion as he continued to bring in young mutants. She instantly became best friends with a young girl from Kenya named Ororo Munroe, who had the ability to manipulate the atmosphere. She would also eventually fall for the newest recruit before the formation of X-Force, Scott Summers.

When Scott first arrived at the Xavier Institute, he was distant and closed off from the other students. However, Jean offered a kindness he had never experienced before, and he quickly found himself opening up to her. Jean had always believed that Xavier was grooming her to lead his team of mutant heroes, but she came to think that Scott is more fit for that job. Her suspicions were confirmed when Xavier was kidnapped by his former partner, Magneto, and his Brotherhood of Mutants. Jean, Scott, Ororo, and their fellow mutants, Hank McCoy, Kurt Wagner, and Warren Worthington all banded together to take on the Brotherhood and rescue Professor Xavier.

Jean was happy to see Scott coming into his own as the team's leader. She was even happier when they all agreed to stay together as a team to champion for mutant rights, calling themselves the X-Force, in honor of Charles. However, because their private home in Westchester had been compromised and severely damaged by Magneto, the X-Force relocated to the living island Krakoa, which lived just off the coast of Southern California, and considered Charles Xavier its friend.

Since then, the X-Force have become a very popular, yet controversial, team of heroes whose membership continues to expand. Jean took on the name Phoenix, and has become one of the team's most prominent members, constantly attending civil rights rallies and speaking out on behalf of the mutant community.

[[Category: In a Relationship with Scott Summers Characters]]