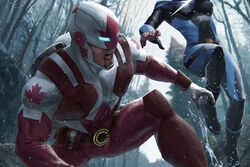 Can I level with you? I have no idea in hell, what I'm doing. But the people need hope... they need a symbol they can look up to. And if no one else is willing to step up... then I have to be.

Jean-Paul Beaubier and his twin sister, Jeanne-Marie, were separated at a young age by Apocalypse's forces. While Jeanne-Marie was recruited into his mutant army, Jean-Paul was eventually found by Magneto, who recruited him into the X-Men, where he fell in love with his teammate, Iceman.

A few years later, after the death of Captain America and the fall of the United States, Jean-Paul took it upon himself to pick up the pieces of the Avengers, seeing beyond just the needs of the mutant race, but trying to protect all life on Earth that opposes Apocalypse and Ultron. He dubbed himself Captain Canada, as the majority of the American survivors relocated to the free land above the border, and helped relocate the Avengers to the old Department H facility after Ultron besieged the Man on the Wall Compound.

Captain Canada and the Avengers later teamed up with the multiverse hopping team, the Outsiders when they came to Earth-9999. They joined forces and worked together to bring down both Ultron and Apocalypse. Once the mission was won, Captain Canada joined the Avengers and the X-Men so that the heroes could all work together in rebuilding society.

Super Strength While at Lightspeed

[[Category: In a Relationship with Iceman Characters]]
Retrieved from "https://marvelcomicsfanon.fandom.com/wiki/Jean-Paul_Beaubier_(Earth-9999)?oldid=246142"
Community content is available under CC-BY-SA unless otherwise noted.